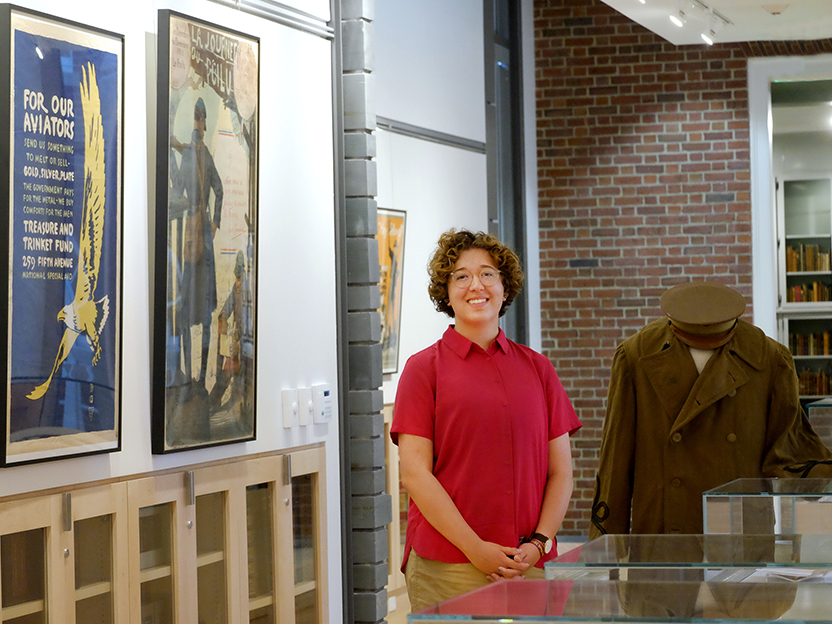 As part of the ongoing World War I Centennial, history major Sophie Wunderlich ’18 helped curate an exhibit in the Williams College Special Collections exploring the life and death of WWI veteran and Williams Class of 1905 alumnus Charles Whittlesey. As leader of the troop commonly referred to as “The Lost Battalion,” Whittlesey’s history plays a central role in the exhibit, “The Great War at 100: Williams College and Beyond.”

The 77th Division was cobbled together from a group of mainly untrained draftees who, back in the States, were immigrants living in poverty. Whittlesey, a lawyer who opposed the war until the 1915 sinking of the passenger ship Lusitania, led troops into battle in the Argonne, erroneously believing there were Allied forces on either side. The battalion was soon surrounded by German troops, and over the course of six days until their rescue, hundreds of men died—some from friendly fire.

“While Whittlesey was given a hero’s welcome and multiple medals of honor, the [soldiers] were thrust back into lives of relative obscurity and subjected to prewar levels of discrimination,” Wunderlich writes in the pamphlet that accompanies the exhibit. “He helped his men find jobs, lent them money and even provided legal assistance.” But, suffering from post-traumatic stress disorder and deeply uncomfortable with his celebrated role in what he felt was a disastrous operation, Whittlesey committed suicide in 1921.

Wunderlich found it deeply moving to research Whittlesey’s life and curate the exhibit case with his letters and other objects he owned. “I didn’t expect to get so much out of this project,” she says. She recently completed a thesis on the concepts of destiny and the distant future in Nazi ideology and says she is more familiar with the history of Germany during the Second World War. “I’ve had a lot of practice empathizing with people I dislike in order to better understand history, so it was unusual to work on someone I came to like and even identify with over the course of my research,” she says.

Wunderlich says that Whittlesey was active in campus life at Williams, including working on The Williams Record. What’s more, pointing to the possibility that Whittlesey was gay—he never married or had a girlfriend, was often among men and spoke frequently about feeling out of place in society—she says, “As a queer historian, researching queer people can be a way of connecting with an often hidden or unknown history, and I came to see Whittlesey as someone with a complex inner life not unlike my own.”

“If you scratch the surface of any war story, you find a personal story,” says Sylvia Kennick Brown, the reference archivist who helped curate the exhibit. “In Sophie’s case, it seems as though that experience led to her catching the curating bug.”

Wunderlich says she came to the part-time job in the archives with a little bit of museum work under her belt, having interned at the United States Holocaust Memorial Museum in Washington, D.C., last summer. But her Williams research was different, because she got to work directly with objects. “It was an amazing experience to get to set up the case and display of Whittlesey’s coat, his Medal of Honor and the letter he wrote to his law partner just before his suicide,” she says. “It was humbling, and I learned a great deal from it.”

Wunderlich, who will spend the next year in Germany on a Congress-Bundestag Youth Exchange Fellowship, plans to apply to Ph.D. programs in history over the summer. She says she hopes her future as an academic will include more archival and curatorial work, because, “This kind of work can physically reveal the level of complexity in historical figures’ lives that can otherwise be lost to time.”

“The Great War at 100: Williams College and Beyond” is on view in the Schow Gallery and Chapin Gallery in Sawyer Library through the end of 2018.

Shifts in the Supreme Court
Strength in Numbers