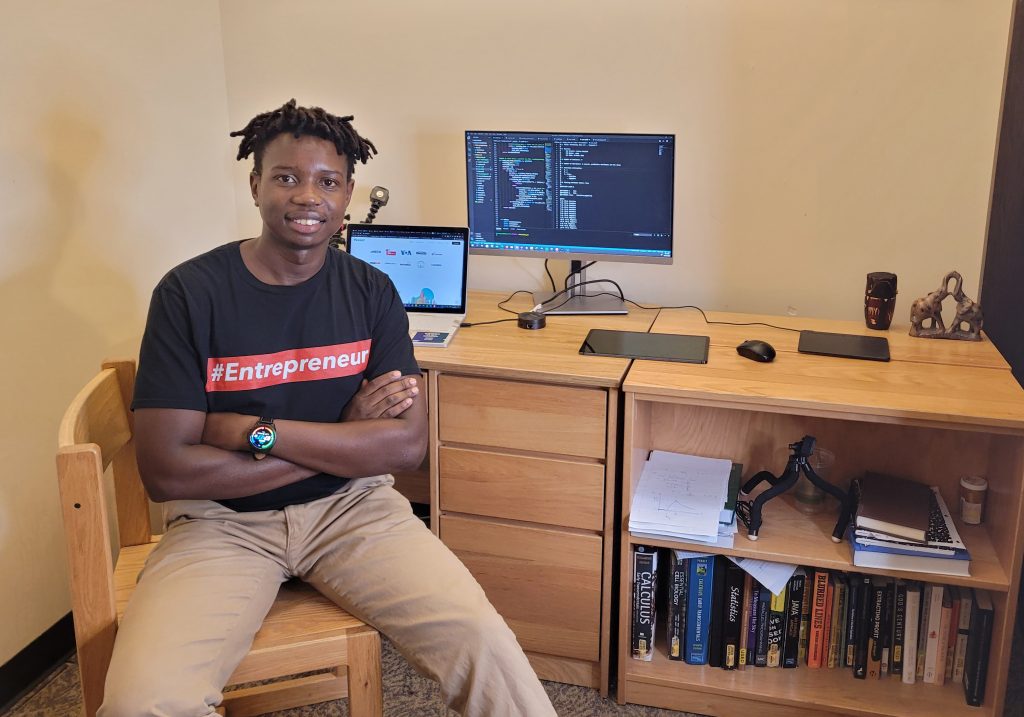 Even with his feet solidly on the ground in Williamstown, Tafara Makaza ’22 is helping to improve economic opportunities in his home country of Zimbabwe, inspired by the technology that’s a part of many students’ everyday lives. In just a few short years—and mostly from his room on campus—he has worked to help people in Africa send money to each other, find and offer rides, and earn money through gigs and sustainable income.

When he first came to Williams, Makaza says he was surprised by the ease of ordering goods and services online. “Things like Uber—it’s very common, right?” he says. “You sort of overlook it. But for me, when I first came here, that was something totally new for me. Even something like online shopping—ordering something and trusting that it would show up in Paresky—I had to take at least two months to try it out and see if I could really do it. Things like that were so overwhelming for me.”

Not only did he test out the tech, but he also began to think of ways it could benefit people back home. “Just coming from a different place makes you realize how powerful these innovations can be, compared to people who grew up here their whole lives,” he says.

He developed his first app in 2016, when he wanted to send his mother a Christmas gift without the hassle of collecting wired money. (See a 2017 article about the app, FamKeepa.) Makaza was inspired to create another app after working through Projects for Peace in the summer of 2019 to create agricultural jobs in Zimbabwe. In a country where many people earn income selling one or two chickens at a time from their homes, he organized a larger chicken business: He contracted workers to build a run, bought chickens and feed, hired workers to slaughter and process the chickens and connected the suppliers with vendors. The project involved 50 women who are still employed with the business today.

Later that year, he joined Tuverl with two Harvard alums: Hope Ndhlovu from Zimbabwe and Bahlakoana Mabetha from Lesotho. The app, inspired by Uber and Lyft, seeks to make public transportation less expensive and more accessible to millions of commuters across Africa by helping public transport operators optimize their routes, reduce operational costs and increase revenue. Operators receive secure payments and customer feedback that can help shape their businesses. Ridesharing through Tuverl helps reduce the number of vehicles on congested African roads, lowering CO2 levels. While Makaza and his cofounders originally concentrated on public transportation, the pandemic shifted their focus. “We had to figure out how to pivot and start targeting smaller cars, figure out contact tracing,” he says. 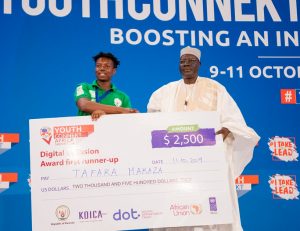 Makaza earned second place for an Innovation and Digital Inclusion award at the YouthConnekt Africa Summit in Rwanda for young entrepreneurs in 2019. As a result, Makaza was tapped as an ambassador for a Samsung and United Nations Development Programme initiative encouraging young people to work toward “17 Global Goals” to improve the world by 2030. Samsung’s Global Goals app has been downloaded on more than 45 million smartphones as of this writing, and a short video Makaza made to promote goal number 11—sustainable cities and communities—has reached nearly 9 million viewers on YouTube.

Makaza launched another new app with two Williams alumni—one Rwandan and one American—in early 2020. Having studied the gig economy in Zimbabwe, he wondered if he could connect informal workers—who constitute 80% of Africa’s workforce—and employers. “In terms of employment opportunities [in Africa], if you’re a young person, maybe you’ve done medicine or engineering in college, and then you graduate and there are no jobs, and you’re just selling tomatoes,” he says. “If someone is smart enough to get their electrical engineering degree, they can certainly come and help you out with a solar installation.”

Their answer was Fixa Rwanda Inc., which connects households and businesses with an on-demand workforce. Vetted and trained workers can use the app to reach clients, gain greater access to regular work and access financial services, such as bank loans for buying equipment. The service will be available in Rwanda this summer, but the team intends to expand the business across Africa.

Speaking about his motivation for creating these apps, Makaza says, “The advantage I have is that I spent 20 years of my life in Africa, and, coming here, I’m the best person to contextualize these solutions in a way that people back home can really use and appreciate.”

Because of the pandemic, Makaza has been on campus since February 2020, taking advantage of a three-semester leave to work on his businesses and an Alumni Sponsored Internship Program, where he served (remotely) as a project manager to help develop online learning platforms for public high schools back home in Zimbabwe. “Whenever I’m not doing school things, I’m doing business. I live in an office. I work out of my office and I sleep in my office.”

As Covid restrictions begin to loosen, Makaza plans to work full time on Fixa in Rwanda this summer. Though he’s pursuing a major in astrophysics, he sees limitless career opportunities. “The beauty about being at Williams is, of course I’m doing an astrophysics degree, but I’ve also taken dance, computer science, economics, writing,” he says. “Maybe I’ll do an MBA, maybe I’ll be working on my business or maybe I’ll be doing a Ph.D. in astrophysics or computer science. You never know. And I’m very comfortable with that, as long as the options are there.”

The Show Goes On
More than Medicine