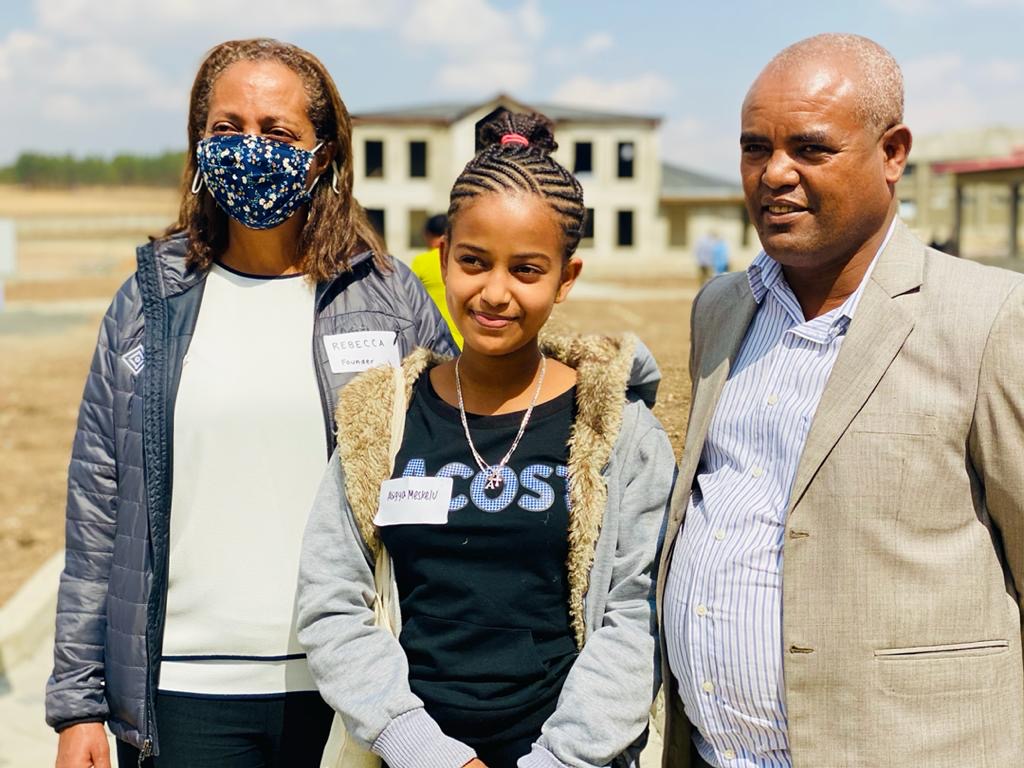 Forty-five years after fleeing Ethiopia with her family, Rebecca Haile ’86 has founded a co-ed boarding school there aimed at re-envisioning high school education—and her homeland’s future.

The Haile-Manas Academy (HMA) opened its doors in January to an inaugural class of 35 ninth-graders. Named for Haile and her husband, Jean Manas, cofounders of Ethiopia Education Initiatives (EEI), the school is located in the city of Debre Birhan, at the geographic center of a country that HMA’s website describes as “a study in startling contrasts.”

Ethiopia is “struggling with persistent poverty,” the website states, with an economy heavily dependent on agriculture and a 20% unemployment rate. Yet the country also has one of the fastest-growing economies, Haile says, and it’s home to 50 million people under the age of 18. That means tens of millions of young Ethiopians will be entering the workforce over the next few years.

“There’s so much opportunity in Ethiopia right now,” Haile says, “but a major challenge is the mismatch between what’s needed in the marketplace and what the schools are generating. There’s a real need for people who have an enterprising mindset and 21st-century skills such as collaboration and critical thinking.”

HMA’s approach is to build upon the rigorous national school curriculum, which is typically taught with a focus on rote memorization, by employing hands-on learning—the students are designing and building a playground, for example—and teaching students how to think and problem-solve without the fear of making mistakes. Says Haile: “Between Williams and Harvard”—where she received a law degree—“I feel like I know how to analyze a problem. I don’t feel badly when I don’t immediately know the answer, and I know how to ask for help when I need it.”

To demonstrate this, during orientation at HMA she made a point of addressing students and their families in Amharic. “Growing up in the U.S., I lost a lot of my Amharic, and I’d been working really hard in the last couple of years to get it back,” Haile explains. She recalls telling those gathered that although her speech wasn’t perfect, she was doing the work of lifelong learning.

HMA is also groundbreaking in that, as a residential school, it can recruit students from across the country. The pandemic cut short their efforts in the spring of 2020—and delayed the school’s opening that fall—but Haile hopes to see 100 students in each of the four classes in the future. Prospective students are evaluated on their middle school grades, an admission exam and interviews. The first cohort received financial aid to cover 100% of tuition and fees.

Haile emphasizes that creating a national student body builds community. “I hope that if students learn to live together and problem-solve and create joy with people who are different from them, and who come from different parts of the country,” she says, “they’ll be much better equipped to be leaders of an ethnolinguistically diverse country.”

Situated on 20 acres and designed to accommodate 400 students in more than a dozen buildings, HMA also aspires to be zero-waste, composting food and banning plastic. The school recently won a grant for solar panels. And through partnerships with a local teachers’ college and other organizations around the country, Haile says she hopes the campus becomes a model for teaching effectively without a wealth of resources.

Haile was 10 when her father, a leading academic and Amharic language scholar, was shot and nearly died as a result of his political beliefs in the aftermath of Ethiopia’s 1974 revolution. The family came to the U.S. as refugees in 1976 and landed in Minnesota. As she describes in her 2007 memoir Held at a Distance, the desire to reacquaint herself with her homeland emerged slowly, culminating with a 2001 visit to Ethiopia after 25 years in the U.S.

Subsequent trips and many conversations with businesspeople, educators and government officials left Haile thinking: “I wonder what I can do to be productive here.” She and Manas founded EEI in 2016, and HMA is their flagship project.

“I’m not an educator, but I recognized the potential of a school like this in Ethiopia,” Haile says. “Given my roots there and my appreciation for the type of education I received here [in the U.S.], including at Williams, I thought I could put together the people and resources needed to pull this off and be a really good advocate for it.”

These days, Haile, who’s based in New York City, is busy promoting HMA and seeking resources and partnerships. She’s also senior adviser at the boutique investment bank Foros, which she helped Manas start in 2008. In December 2020, she was elected board chair of EMILY’s List, a political action committee that helps elect pro-choice, Democratic women, and she serves on the board of one of her children’s schools.

Haile plans to travel to Ethiopia every two months or so, to both get HMA fully off the ground and to explore the next opportunities for EEI. (The eldest of her three children is volunteering at HMA during a gap year before starting college.) When Haile returns to Ethiopia these days, it’s with a much different feeling than she had in 2001.

“Ethiopia feels like home in a way I never thought it would,” she says. “I didn’t think I would feel this connected to it again.”

Watch a video of Haile-Manas Academy’s first class, with clips from opening day and a celebration of learning with their first presentations to community leaders and visitors: