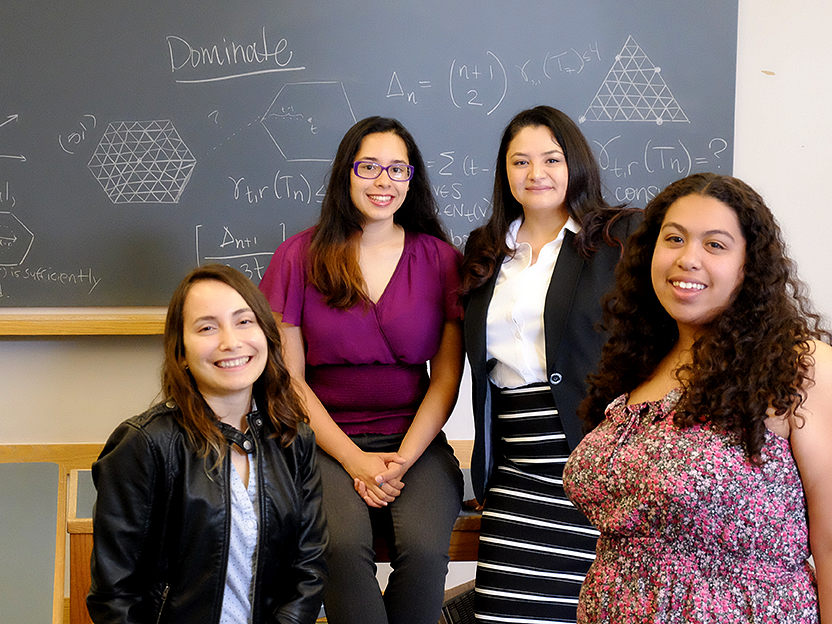 Claudia Reyes ’18 came to Williams to study math. She loved the subject in high school and heard wonderful things about the department. But when she got here, she started to doubt herself—and her skills. “I felt lost in my math classes freshman year,” she says. “I was one of very few women, and the only person of color, and I didn’t feel I could speak up and ask questions in that environment.”

Reyes is quick to add that no one discouraged her outright; she just wasn’t comfortable. But she didn’t quit, in part thanks to the friendship and support she found from her sophomore-year roommate, Dalia Luque ’18, a fellow math lover and fellow Chicana. The pair signed up for more math classes, and, Reyes says, “We encouraged each other to ask questions, we helped each other with the material, and it made it easier not to be the only one anymore.”

Despite their developing sisterhood, Luque and Reyes felt conflicted about declaring themselves as math majors at the end of their sophomore year. “One day, I read about a new professor, Pamela Harris, and it was emotional for me to see that the department had hired a Latina woman,” Reyes says. “It was a pivotal moment, and both Dalia and I declared math majors.”

Fast-forward a year, and Nohemi Sepulveda ’18, a third Chicana math major, signed up with Luque and Reyes for Harris’ tutorial, Research Topics in Graph Theory. Over the course of their senior fall semester, the students worked together on a question about cell phone range in a city.

“The problem is perfect for an introduction to graph theory,” says Harris. “We imagine a city mapped onto a grid and try to figure out the optimal locations for cell phone towers assuming certain rules about the strength of the signal each transmits.” Most approaches to this problem assume a square grid, where streets are lines and intersections are nodes; the rules governing the problem state that cell phone reception decreases along those lines.

Reyes, Luque and Sepulveda asked what would happen if the grid were made up of triangles instead of squares. The results were surprising. With a square graph, the students “could only approximate locations for cell towers,” Harris says. “With the triangular grid, they were able to very precisely state where to place the towers so there would be zero signal waste. None of us knew a triangular grid would be more efficient.”

Harris knew this was an important discovery in graph theory, and she suggested the team continue working on the project over Winter Study in January, a time when students take a single, month-long course. The team worked on the graph theory project in addition to their regular Winter Study courses that year, and by the time the spring semester began, they were close to a final draft of a paper Harris felt was publishable. But there was still a bit more work to do.

Despite the students’ other commitments—all three are double majors—they kept working on it, and by the end of spring break, they were ready to submit it for publication. While the group won’t know for some time if their work is accepted, they all agree that the experience itself was meaningful. “There’s no grade attached to this work,” Reyes says. “But there is the satisfaction of solving something to its point of completion.”

There is also the satisfaction of working within a group of underrepresented people and the message this can provide to the community—at Williams and beyond. “I have not before come across a paper in a major research journal authored exclusively by Latina women,” says Harris. “While I don’t know for sure that we would be the first, I can say that it’s very rare.”

As for Reyes, the experience of doing original research—and of being mentored by someone she feels connected to “through our shared culture and our love for math”—gave her more confidence. She will start a Ph.D. program at the University of New Mexico in the fall. Luque plans to work at a nonprofit before going to law school, and Sepulveda will be in Spain next year teaching English as a Fulbright fellow.

Despite going in different directions after graduation, Reyes says, “Dalia, Nohemi and I hope to work together again in the future on another math project.”

Adds Harris, “They did really good math, and because of it, a sisterhood developed.”

A Complicated History
The Licorice Project