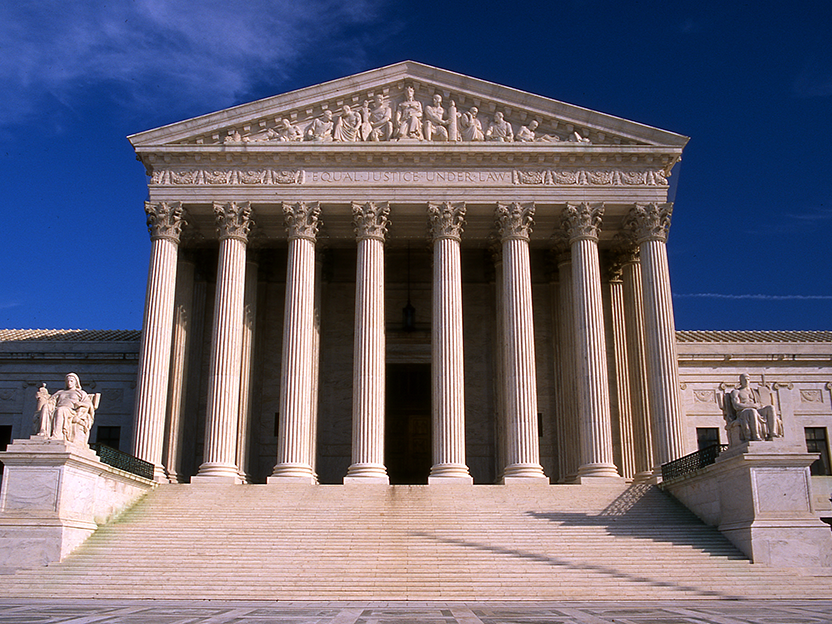 Shifts in the Supreme Court

When U.S. Supreme Court Justice Anthony M. Kennedy announced in late June his intention to retire later this summer, the news sparked a flurry of reaction across the political spectrum. Justin Crowe ’03, associate professor of political science and author of Building the Judiciary: Law, Courts and the Politics of Institutional Development (Princeton University Press, 2012), takes us behind the headlines in the following Q&A with writer Julia Munemo.

We’ve read all the headlines. What’s really happening right now?
In the office of the White House Counsel, which is in charge of shepherding the nomination, they’re vetting the people on President Trump’s list of possible nominees, and while Trump is likely to pick from that list, he’s not bound to do so and I’m sure other names are coming in for them to vet.

In the Senate, you’ve got lots of jockeying going on between, on one hand, Senate Majority Leader Mitch McConnell and Chuck Grassley, the Republican chairman of the Senate Judiciary Committee, and on the other hand, Senate Minority Leader Chuck Schumer and Diane Feinstein, the Democratic ranking member of Judiciary. Most of that maneuvering is rhetorical, because if the Republicans want to get someone confirmed, they’ll almost certainly get that person confirmed—unless one or more from their side of the aisle defect. So there’ll be lots of debates in both of those cloakrooms about messaging, how to push their advantage or overcome their disadvantage, how to frame the debate.

Can you break down both sides of that equation?
On the right, McConnell and Grassley are looking for a quick confirmation before the November election. They’re also thinking about ways to use the confirmation process to squeeze red-state Democrats, like Heidi Heitkamp of North Dakota or Joe Manchin of West Virginia, putting them in the difficult position of choosing between voting with their party against the nomination—which could imperil their chances at reelection—versus voting with against their party to confirm.

On the left, Schumer and his allies are likely reaching out to Republican senators such as Lisa Murkowski from Alaska and Susan Collins from Maine, the two most moderate members of the Republican caucus, and perhaps to Bob Corker from Tennessee and Jeff Flake of Arizona, neither of whom are running for reelection. The Democrats’ goal here will be to put some pressure on them ahead of time and see—even if they can’t get those Republican senators to vote against a nominee—if can they encourage them to pressure the Trump administration about who might be a suitable nominee.

For instance, both Murkowski and Collins are pro-choice, and they could say that they won’t vote to confirm a nominee who is especially aggressive about overturning Roe v. Wade. Now, in this day and age, no nominee from a Republican president is going to say “I’m pro-choice,” and a Republican Senate wouldn’t confirm a nominee who did, but there are scholars and judges who say things like “Roe v. Wade is the greatest abomination in the history of constitutional law,” and then there are others who are more quietly pro-life. Unless Murkowski and Collins are very clear that they require someone in that latter category, we’re likely to see a nominee with either a strong pro-life record or a fairly clear set of hints of pro-life sensibilities. In general, unless, as I said, there is an attempt to get out in front of the nomination by Collins and Murkowski and/or Flake and Corker to say they want someone who looks different, we should expect a nominee that shares the usual roster of conservative constitutional commitments—to, for example, religious liberty and against, to pick one, affirmative action. But even if the moderates or the retirees do that, it’s entirely possible the White House might just call their bluff and dare them to vote no, and it’s unclear if they actually would.

Do you anticipate that Democrats will attempt to stall or quash a confirmation on any Trump appointee until after the 2018 elections, like the Republicans did with President Obama’s appointment of Merrick Garland?
They’ll attempt to, but there is almost nothing they can do. When the Democrats filibustered Neil Gorsuch (who succeeded Justice Antonin Scalia), the Republicans went “nuclear” and abolished the filibuster for Supreme Court nominations, so there is little of consequence that Democrats can do without Republican votes. Now, where it’s a little tricky is that the Republican majority is only 51/49 in the Senate, and Arizona Republican John McCain hasn’t been in Washington for a while. Is it conceivable that he’ll come back to vote on a Supreme Court nominee? Anything’s possible, but all accounts are that he’s pretty ill. So that makes it 50/49, which means all Democrats need is one Republican to vote no on the nomination to torpedo it. But it’s hard to be the one person to vote against the other 49 members of your party. Will there be some strength in numbers with Murkowski and Collins, or Corker and Flake? Maybe, but remember that all four of them voted for Gorsuch.

So, yes, Democrats will try, and there are things they can do to drag the process out a bit, but they can’t stop it. The only way to prevent confirmation is to find a Republican to vote against the nominee.

How do you envision the Supreme Court shifting as a result of Chief Justice Anthony Kennedy’s retirement?
What makes Kennedy’s retirement significant is that the Court, as we saw over the last few weeks, continues to be a closely divided 5-4 on most things: gay rights, gerrymandering, abortion. On those issues, Kennedy has been the swing vote. But Kennedy is not right in the middle—he’s much more solidly on the right. The idea that Kennedy is some sort of hero to the liberals is a bit overplayed, and the lie was put to that during this term, when he voted with the conservatives far more often than with the liberals. That said, the first line of his obituary will be about writing the four big gay rights decisions that span from the early 1990s through the early 2010s, and for that, liberals have a soft spot in their heart, but he was never a reliable vote. He voted to sustain plenty of abortion regulations, he’s voted in ways that were hostile to affirmative action, so he’s not always been a friend to liberals.

So, what happens when he leaves? If we assume Trump appoints someone more in the Gorsuch mold, that makes Chief Justice John Roberts the swing vote. Might that have the effect of moderating him slightly? Perhaps, perhaps not. His jurisprudence is slightly more conservative than Kennedy’s, but suddenly being the deciding vote can have an interesting psychological influence on a jurist. Especially as chief, Roberts has a real sense that he is the guardian of the Court’s legitimacy. I’m going to put an asterisk on what I’m about to say, because there’s plenty of times it doesn’t hold, but he has occasionally been hesitant to overturn precedent quickly or to overturn landmark decisions. That’s something that could prove important on issues such as gay marriage. Who knows how this will play out, but Roberts’ role is one of the uncertainties here.

As far as checks and balances, that’s far broader than the Court and depends on how things evolve during the Trump era. The Supreme Court is an important body in the sense that it has the quasi-final say on many issues, but it’s a reactive body that relies on states or the federal government doing things that citizens then challenge. So there are natural checks and balances built into the system. It’s not as though you put a fifth conservative member on the Court and all of the sudden everything Republicans have ever wanted becomes law. It’s a slower, longer-term process than that, but, if the Court becomes more reliably conservative, the best checks for Democrats worried about Republican policymaking become electoral.

Can you put this in historical context?
If we consider Kennedy a “moderate”—and I use air quotes there because, outside of a few social issues dear to liberals, he’s really not—and if we see this as an opportunity to replace someone right of center with someone on the far right, then this is undeniably significant. It’s not quite as dramatic as when Warren Burger replaced Earl Warren or Clarence Thomas replaced Thurgood Marshall, but, because of Kennedy’s role as the swing vote on certain issues, it has the potential to shift jurisprudence in ways that matter. And, of course, with the nominee likely to be in his/her 40s or early 50s, it temporally extends conservative control over that seat for three decades or more. For conservatives, the opportunity to replace a justice they lamented was too “squishy” on culture war issues is one of unbridled jubilation. For liberals who only two years ago envisioned the first Democratic majority on the Court in more than a half-century, it’s pure agony.