The Human Library - A Student's Perspective 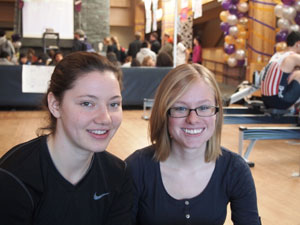 When I arrived at the Human Library on Friday, I immediately ran into Evalynn Rosado, a fellow senior, who is majoring in sociology. Having spent an hour and a half reading three books at the Human Library, she had paused to eat her lunch before class, which was starting in a few minutes.

She had just finished The Gipsy Tale when we started chatting. The Gipsy Tale was a Williams student and a Roma whose story she found “incredibly interesting.” He shared both his personal experiences as a Roma and more broad information about Roma culture in Europe. Rosado had never met him before, but ultimately found that they had a lot in common and looked forward to seeing him around campus in the future.

When I made my way to check out a book for myself, it took a few tries before I found one that was available. Having missed out on meeting the Evangelical Christian and the Child of the Holocaust Survivors because of their evident popularity, I took the librarian’s suggestion to meet with two Mormon missionaries instead. 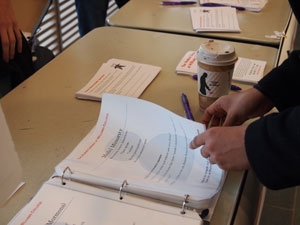 Rosado had pointed out that you only get the title of the person’s experience, without any information as to their gender, race, age, or affiliation within the community. “You can’t judge them by their cover because you don’t even get a cover to look at,” she said. But as my librarian escorted me through the books’ waiting area, I was more impressed by their leaps of faith. True, I had to take a chance by selecting them without seeing the cover, so to speak, but they had agreed to share these immensely personal experiences with whoever arrived, library card in hand.

The two young missionaries introduced themselves to me very politely, perhaps wondering what to expect. Although they had signed up to dispel prejudices, I could tell that they were trying to size me up, too. Would I mistakenly think polygamy was a central principle of Mormanism? Would I recoil at their decision to so wholeheartedly pursue their religious beliefs for two years straight? Even in environments most conducive to sharing and honesty, it seems, we still have to walk on eggshells to find that middle ground.

Whereas Rosado had preferred to let her books lead the conversation, I asked the missionaries lots of questions, which they seemed to appreciate. I always associated Mormonism with close-knit, loving families, so my first question after we got through the basics was how they were getting along without their families. They missed them, naturally, and talked about the strict rules regarding communication back home (handwritten letters whenever they want, but e-mails only once a week and phone calls only on Christmas and Mother’s Day). Although I was aware of the missionary tradition in the faith, I had never truly recognized that leaving the family—and, by extension, the familiar—was such a crucial part of the journey. They were putting themselves fully in their faith and asking it to carry them somewhere new, as if to prove to themselves that it still held true, even in strange new circumstances.

I also learned how important a resource they must be to the Mormon community here. Despite the many, many steeples of North Adams, I had never seen a Mormon Church in the Berkshires. The few Mormons here have been meeting in the Holiday Inn, it turns out—a community I had never known existed in the area.

Since my meeting with the missionaries, I have found myself thinking of other questions I could have asked, had I had the inspiration or the courage: How could they incorporate the spirituality of these years into their daily life in the future? Do they think the fact that only male Mormons do the missionary work will affect their future relationships?

To be honest, I wonder what would have happened if I had kicked aside the eggshells: What are your opinions on gay marriage? What do you do when you disagree with a church policy? A half an hour is not nearly long enough to get into the challenging conversations, the ones that really make you grow. But I think this was the lesson the Human Library gave me: the recognition that I already have a stock of friends at Williams and in the Berkshires who have backgrounds different from mine and now is the time to get to those difficult, massively important discussions.

The Human Library evidently impressed Rosado, as well, as she expected to come back on Saturday and check out “as many books as I can.” She seemed frustrated that her experience was being interrupted by class; after all, it was her professor who had originally encouraged her to come to the event. Later in the semester, the students of ARTS 204, Perceptual Intelligence, will do projects in the community. The professor evidently felt that the Library would offer good practice.

And that’s what connects the Human Library to Claiming Williams, to the events after Homecoming this year, to College Council’s Winter Study efforts to promote conversation: we can all always use more practice when it comes to having respectful discussions with those who are radically, wonderfully different from us.