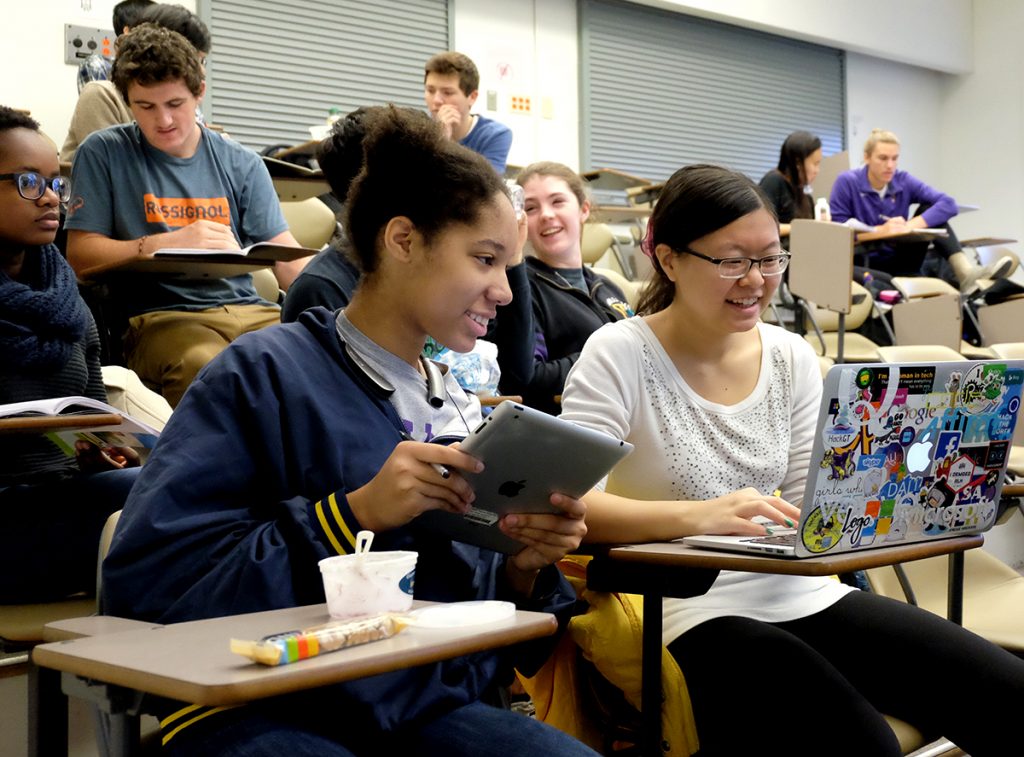 Welcome, Everyone, to Computer Science

It’s a play on words—or rather on acronyms. UnICS is the name of a student-led group, and it stands for Underrepresented Identities in Computer Science. The pun is that its homophone, UNIX, is an operating system some of those students have learned to master.

“UnICS was created with the goal of providing support for students who feel excluded, especially students from groups underrepresented in computer science,” says Lauren Yu ’16, who, along with Pamela Mishkin ’16, founded the group last year. “Our main objectives in starting it were to expand dialogue around diversity and to put changes in place that would meaningfully improve students’ experiences.”

While the leaders of UnICS don’t define who might identify as underrepresented—the group is open to anyone enrolled in a computer science class—there is a national trend that sees fewer African American, Latino, and female students in undergraduate and graduate computer science programs relative to their share of the population.

UnICS is all about making the major less intimidating to those who may feel like outsiders. They offer peer mentoring, hosts regular dinners, and work to make teaching assistants and other upperclassmen more approachable to underclassmen.

“There can be an attitude that everyone even in an introductory class has been coding for years,” says José d. Rivas-García ’17, one of four leaders of the group, and one of 78 current computer science majors. “But it turns out that there are plenty of people who come in not knowing anything.”

But that isn’t necessarily obvious, says Melanie Subbiah ’17, another leader of UnICS. “In an environment where you’re constantly aware of your minority status, regardless of how inclusive it is, you’re constantly battling imposter syndrome. UnICS allows us to talk about our experiences, so people can recognize they’re not alone.”

During the fall semester, UnICS hosted a job/internship panel during which five seniors provided advice about internships and interviewing skills to an audience of roughly 20 students. They often invite a faculty member to their dinners. And after the 2016 election, the group gathered in the computer science common room to reflect on the outcome. “The group, which ranged from intro-level course-takers to senior majors, met to discuss the effects of the election and to support each other,” says Subbiah.

UnICS is not the only response to concerns about computer science being perceived as exclusive. Professors Jeannie Albrecht and Andrea Danyluk have led a Women in Computer Science group for several years. In addition to mentoring female students, each year they take a group to the Grace Hopper Celebration of Women in Computing, which brings together upwards of 12,000 attendees from over 60 countries.

And in September, chair of the department Brent Heeringa took a group of students to Austin, Texas, for the Tapia Celebration of Diversity in Computing, which was founded by Richard Tapia, a mathematician, professor in the Department of Computational and Applied Mathematics at Rice University, and a national leader in education and outreach. The Tapia conference convenes a group of undergraduate and graduate students, faculty, researchers, and professionals in computing from all backgrounds and ethnicities.

“UnICS is trying to make this department into a place where everyone feels welcome,” Heeringa says. “Like everything, there are things we’re aware of and things we’re unaware of, and this group is helping both students and the department better understand how we can be the most welcoming department around.”

Rivas-García attended the Tapia conference with Heeringa. “Tapia himself talked about how being underrepresented in computer science means accepting the fact that there are hardships that we have to go through, but also recognizing that we’re one community,” he says. “It’s about learning how to get through the hardships together.”

From Williams to Africa
Environmental Impact