The Joys of Teaching and Learning: Peter Thorp ’70

Four decades at work in secondary school education may not be the most common path for an art history major to take, but according to Peter Thorp ’70, the connection is crystal clear.

“At Williams, I was exposed to an ethic of teaching and learning in partnership,” he says. “I didn’t plan to study art history, but I fell in love with it because of the marvelous teachers I encountered, who showed me how much joy they found in teaching.”

After graduation, during a year spent traveling and studying on a Watson fellowship, Thorp was encouraged to join his old professor, Whitney Stoddard, in Psalmodi, France. Stoddard was just beginning an archaeological excavation of a medieval monastery, and Thorp spent five summers at the dig.

In time, he decided to earn a master’s degree of education. His first teaching job was at a private boarding school in Colorado, where he thought he’d spend a year or two before returning to the East Coast. Twenty-three years later, he was headmaster at the Cate School in Santa Barbara Calif., (“we call Exeter ‘the Cate of the East,’” he laughs) and realized that he had not only become a Westerner, but that his entire career had been spent with students whose lives wouldn’t be very affected if, as he puts it, “I suddenly disappeared.”

A graduate of public schools, Thorp notes, “I realized there were other kids who might benefit more from my services.” In 1998, he moved to San Francisco and started a public charter school aimed at providing a college-preparatory curriculum to students with learning disabilities. As founding principal and later the executive director at the Gateway High School, Thorp says, “I did everything from curriculum development to plumbing and construction.”

In 2006, he went to work as chief of staff for the California Charter Schools Association. The position provided him with the opportunity to help some of the 1,100 charter schools in the state navigate issues of governance and educational policy—areas that had become Thorp’s expertise over the years. But after a six-month stint as interim director, he saw that that helping draft policy wasn’t getting him any closer to students.

“I realized that the interest of children in public sector education comes in a very distant second place to the interest of adults,” Thorp says, looking back on his decision to switch gears one more time. “I looked in the mirror and said, ‘Why should I keep beating my head against the wall when it’s clear that what kids really need is not being sufficiently addressed?’” At a time in life when many folks are looking forward to retirement, he started looking for work in a place he hoped to really make a difference. He found it at the Gashora Girls Academy of Science and Technology in Rwanda.

When he was offered the position of founding headmaster of the school, there wasn’t even a school building in place. “The directors of the Rwandan Girls Initiative hired me to carry out their vision of founding a school for girls in Rwanda that would bring together as broad a socio-economic profile of girls as possible, a vital vision given the ethnic violence of the 1994 genocide.” 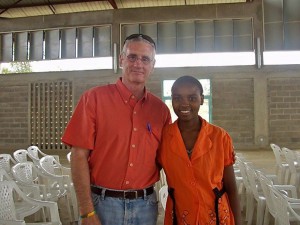 Once they finished construction on the boarding school campus, it wasn’t hard to find students to attend this government-aided secondary school located in a small village about an hour outside the capital city Kigali. Gashora Girls Academy prepares high-school girls for university study in medicine and engineering, and Thorp spent four and a half years as its headmaster. “Twenty-seven of our first class of graduates are now studying in the U.S. and Canada,” says Thorp, adding that they’ve received strong scholarship support.

“I knew when they hired me that one of the directors’ expectations was that I find and train my successor—preferably a Rwandan,” Thorp says. “That accomplished, I’m now the executive director of the non-profit Rwanda Girls Initiative, and as such I help with fundraising and serve as the educational liaison between the current headmaster and the Seattle board.”

Thorp is proud of the educational legacy he’s fostering in Gashora. “GGA combines the best in African education—which is an incredible work ethic and unchecked ambition—with the best in American education of inquiry and critical thinking.” And that, he says, is exactly the combination that he encountered as an undergraduate at Williams.

For more on the Rwandan Girls Initiative, visit this link.