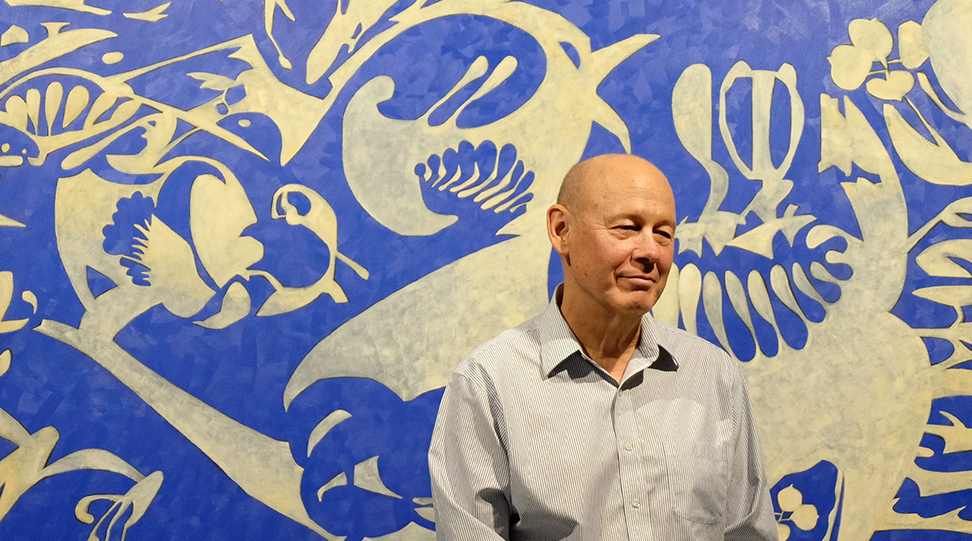 The Forests of Antarctica

The Forests of Antarctica, a new painting series by Williams Professor of Art Mike Glier ’75, depicts what he calls “a distant future, where the temperature is warm enough to support exuberant life in Antarctica, but it’s life we can’t quite recognize.”

Glier, who has been teaching in the art department since 1988, says two previous projects also addressed “an environmental agenda about place and globalism.” Along a Long Line, a collection of paintings that was also published as a book in 2009, was composed en plein air, or outdoors. “The paintings tell the story of a yearlong trip along the line of longitude that begins in the Arctic Circle, runs through my studio in Hoosick, N.Y., continues to New York City, and ends in the rainforest on the equator,” he says.

Working on that project, Glier says he realized that he is part of the generation of people asked to consider the implications of their actions on a global scale, and at the same time to be aware of the uniqueness of the local environment, and to protect it. “To be aware of the global and the local simultaneously is a tremendous stretch of perception and an experience that defines our time,” he says.

After Along a Long Line, Glier embarked on another project, Antipodes, which brought him to several locations that are on opposite sides of the globe. It was in New Zealand, while working on Antipodes, that he got the idea for his current project. “It was very windy there, and despite the rocks I’d put to hold down my easel, the wind kept picking my panel up and tossing it,” he says. “The wind was winning, so I decided to draw it.” He was encouraged by the unexpected results of drawing something that is invisible but can be felt. So, he says, “I began to include sound and smell and touch as sources.”

That was in 2013, and since then he has made hundreds of sketches based on the things he can sense. “I am not a synesthete, but I am using all my senses to make myself think differently and invent a set of unexpected images,” Glier says. He’s currently drawing in four forests he’s come to know over the years, one in the Berkshires, one in northern Maine, one in the Virgin Islands and one in the central mountains of New Mexico.

Back at his studio, Glier uses the plein air sketches to make compositions whose shapes suggest, but don’t fully describe, animals, plants, watercourses and outcroppings. “Sometimes the positive form is the image and sometimes the negative form is the image,” he says. “Like walking in the woods, the images flicker in and out of focus. Things have separate edges and seem independent, but at the same time things share edges and seem totally dependent on the surroundings to have any shape at all.”

Glier says his studio work all begins as black and white, or black and tan drawings. But a visit to that space reveals that many of them, in their finished form as paintings, are quite colorful. “When I’m out in the forest, I make color notes, which I use to make the studio paintings,” he says. He works in oil on paper or linen and the sizes range from what he calls “over the sofa to public mural.” The largest pictures, which are about 6 by 10 feet, are some of his favorites. “You can walk around in the big ones.”

This summer Glier will continue to develop the Forests of Antarctica as the artist in residence at Hauser and Wirth Somerset, in Bruton, England. He will be drawing and painting in a garden designed by Piet Oudolf, the landscape designer who created the Highline in New York City, as well as in the hedgerows, forests and fields of Somerset. Then he’ll return to Williams, where he says he loves to teach and live in a community “that is incredibly supportive of creative production.”