How to Buy Art

The Williams College Museum of Art (WCMA) is about to get a new painting. It’s a 19th century landscape called Keene Valley by Hudson River School artist Hermann Fuechsel. But this painting wasn’t selected by the museum’s curatorial team or its director. Instead, it was selected by a group of students. 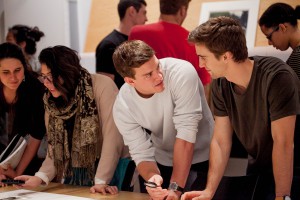 “Acquiring Art: Selecting and Purchasing Objects For WCMA” is an interdisciplinary course that debuted this fall. The instructors are Kevin Murphy, WCMA’s Eugénie Prendergast Curator of American Art, and Stephen Sheppard, the college’s Class of 2012 Professor of Economics. The 18 students in the class, three of whom are in Williams’ Graduate Program in the History of Art, were organized into small groups and tasked with finding a piece of art to add to the museum’s permanent collection.

“We gave them tools to look at provenance and the history of objects, and to consider questions of authenticity,” says Murphy. The five groups—each looking at a different type of art, from 19th century landscapes to contemporary photography—used those skills to find an object and assess its quality.

“On the economic side, we taught them to use data-based analytic models, talked about how auctions function, and provided bargaining strategies,” says Sheppard. Each group used statistical and economic modeling to determine if its proposed object would fit into its budget of $25,000, which was provided by the Fulkerson Fund for Leadership in the Arts. 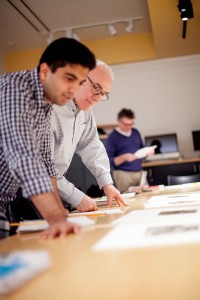 In early November, the class traveled to New York City to see the objects they were considering up close and prepare for auction or bargaining with gallery owners. While there, one group discovered the painting they’d hoped to acquire wasn’t museum quality. “When we looked at it under a black light, we could see it had been touched up quite a lot,” says economics and statistics double major Miles McCarthy ’16, who had never taken an art history class before. “And while many paintings have cracks on the surface, this one just had too many.” The team regrouped and found another painting to study.

When the class returned to campus, each group drafted a written proposal and made an oral presentation to WCMA’s curatorial and academic engagement staff, who considered all five objects carefully and made the final decision. “The one we selected is a spectacular painting that embodies the best qualities of the Hudson River School in the 1870s,” says Murphy. “It’s in untouched, almost original condition with much of its original frame.”

Says Sheppard, “The ‘winner’ of this process isn’t the group whose painting was selected, but the museum. The collection will be augmented in a way that takes careful account of the role the work can play in the museum and the college, and is mindful of the limited resources we have to spend to acquire a new piece of art.”

“This course is another way in which WCMA tries to give all students, not just art majors, deep and intimate relationships with objects, because that’s often how you first feel and appreciate art’s power,” says WCMA director Christina Olsen. “Acquisition making is profoundly, deeply interdisciplinary, and it perfectly embodies the liberal arts. You need very serious art history chops, and you have to do complex economical and statistical analysis. It’s a handshake between those two disciplines.”