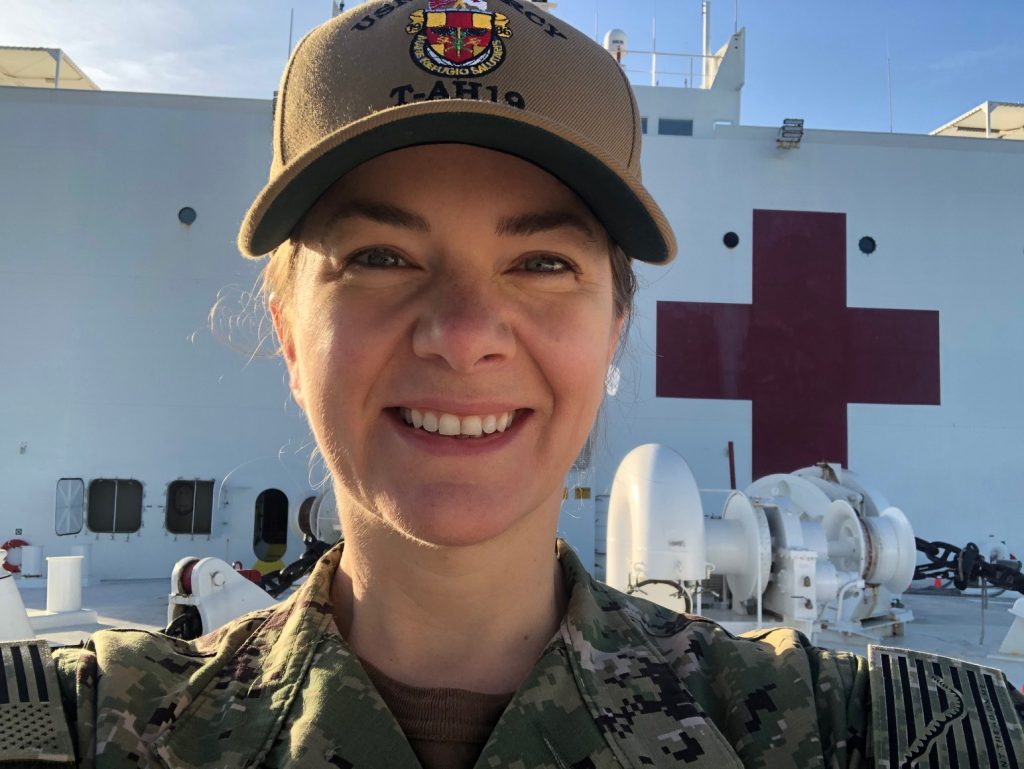 Symbols of Hope and Unity

In this essay originally written for a summer issue of Williams Magazine, Cmdr. Caroline Messmer Schlocker ’02 shares her experience aboard the USNS Mercy. The Naval hospital ship was deployed at the Port of Los Angeles from March 27 to May 15, 2020, to serve as a referral hospital for non-Covid-19 patients.

By Caroline Messmer Schlocker ’02
Photo provided by the author

On March 23, I boarded the USNS Mercy and sailed to Los Angeles from San Diego, where I’m an otolaryngologist at the Naval Medical Center. My presence aboard the ship, as well as that of my fellow active duty and reservist doctors, nurses, medical support service personnel, dentists and corpsmen, is an indication of our extraordinary times.

Starting with the Third Amendment through the Posse Comitatus Act of 1878 to the long-standing primacy of civilian leadership over the military, the role of military action within the U.S. has been strictly controlled. But in this time of crisis, the Navy’s two 1,000-bed floating hospitals (converted from oil tankers) were sent to assist stricken coastal cities; the USNS Comfort was docked in New York Harbor.

These ships were deployed to treat non-Covid-19 cases, and the USNS Mercy’s 12 operating rooms allow for a wide range of surgical procedures. There is also a CT scanner and an interventional radiology suite, though there’s no MRI since the magnet fares poorly within the steel walls of the ship. Much to the chagrin of both patients and staff, the same is true of cell phones.

The ship’s staff live where they work. Officers share two-room staterooms with bunkbeds and lockers for personal storage for four to eight people. Enlisted members live in larger rooms with triple-stacked bunkbeds and up to 60 roommates. Patient wards are open-bay, and bathrooms are communal. On these general wards, bunkbeds pose considerable challenges for mobility-impaired patients.

During our seven-week mission, Covid-19 did not overwhelm Los Angeles’s medical system. We treated stab wounds and gunshot wounds, appendicitis and cholecystitis. We even replaced an infected pacemaker—the first surgery of its kind on a hospital ship. But we stood at the ready to treat Covid-19 patients if our mission needed to change. Like many doctors throughout America, we were ready to shed our subspecialty training to fight the disease where it might meet us.

Aboard the Mercy, our cohesiveness as a team resulted from our shared values of honor, courage and a commitment to providing exceptional care to whomever the nation asked us to serve. Above and beyond the care we provided, the hospital ships served as symbols of hope and unity in a time of crisis.

Cmdr. Caroline Messmer Schlocker ’02 is an otolaryngologist in the U.S. Navy, which she joined immediately after graduating from Williams. The views expressed are those of the author and do not reflect the official policy or position of the U.S. Navy, Department of Defense or the U.S. government.