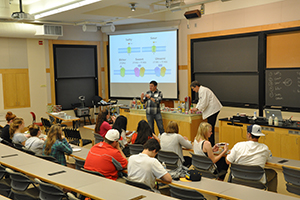 “It’s easy for everyone to see that writing a novel or a piece of music is creative,” he told them. “What we want to emphasize today is that ultimately, after the foundation has been laid and the language of science learned, science is just as creative.”

So began the first-ever ScienceBlast, a day-long program that brings high school students to campus to meet student and faculty scientists and gain exposure to college-level research and facilities. The goal was to encourage local high schoolers to think about science as a career.

Majumder’s message resonated with high school junior Sophie Gerry, who always thought she would study visual arts in college. “ScienceBlast confirmed that I should to stay open to any subject that catches my attention,” she said.

Throughout the day Williams faculty from astronomy, biology, chemistry, geoscience, neuroscience, physics, and psychology led a variety of workshops. Each was designed to be hands-on and expand upon the science students are learning in high school. “Ground-breaking science research is not done by reading a textbook,” says assistant professor of biology Matt Carter. “It’s done by working in a lab, experimenting, and trying new things.”

Carter co-taught a workshop called “The Biology and Chemistry of Taste” with chemistry professor Jay Thoman ’82. They explored how the tongue senses and perceives taste on both a biological and a chemical level. “We had some fun with ‘gastronomical illusions,’ in which we fooled our brains into thinking they were tasting something different from what was actually on the tongue,” Carter says.

Each student participated in two workshops and attended a panel with current Williams science majors. “The panel highlighted the various pathways towards studying science in college,” says geoscience major Jeffrey Rubel ’17, who helped organize the event. “Each Williams student on the panel studies a difference branch of science and talked about his or her unique journey in science.”

Rubel says he hoped students came away with two things: an understanding of the hard work and perseverance that goes into science, and “how much fun science is,” he says. “I hope our passion for it was infectious.”

According to Gerry—who took “The Science of Musical Sound” and “Tiny Fossils, Big Microscopes, and the Evolution of Life on Earth”—the Williams students’ passion and the professors’ insights into their fields were absolutely infectious: “Their enthusiasm for science definitely reopened my eyes to the field. I hope to get more involved with it in college.”

Watch a video about ScienceBlast.