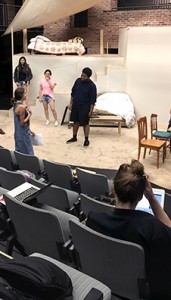 In the CenterStage of the ’62 Center for Theatre and Dance, a student actor knelt down by a potted plant and feigns gardening. She turned to another student seated on a wooden stairwell leading to an open bedroom, part of the minimalist set creating the scene of this play. A third student stood far off on the opposite side of the stage, waiting for her cue.

After they traded a few lines, the dialogue stopped, and conversation with Caitlin Sullivan ’07, artistic director of Williams’ Summer Theatre Lab, ensued. “I think Suzanne is less timid than you’re playing her,” Sullivan suggested to the kneeling actor, who nodded her head. While dissecting an interaction with the actor on the steps, the student asked, “Is that me releasing my mother from this horror?” “I think that’s a fun choice,” Sullivan said.

Sullivan, New York City playwright Caroline V. McGraw, and nine Williams students were working on McGraw’s Believeland, the final production for Summer Theater Lab participants. The play follows a playwright named Carrie as she returns to her hometown of Cleveland to try and decide what to do with her life. Performances of this piece, as well as a piece written by one of the students, were the capstone of the students’ Summer Theatre Lab experience.

McGraw, a graduate from the Yale School of Drama and the author of Ultimate Beauty Bible and The Vaults, appreciates the insights the students bring to the play, saying they express themselves freely. “They have reads on the texts and interpretations that are so helpful,” she says.

Earlier in the summer, McGraw taught a playwriting course as part of the lab; the students wrote original work and also worked on Believeland. After the workshop, armed with the students’ input, McGraw returned home to work on a new draft, which she brought back to Williams for the performances, scheduled for Aug. 11-13.

Giving students the opportunity to interact so closely with playwrights, designers, and actors is precisely the mission of the Summer Theatre Lab. Over seven weeks, students take acting and playwriting classes, learn elements of theater and sound design, and explore the business side, creating marketing pieces and overseeing contracts with the visiting artists. Artists and theater professionals, meanwhile, teach workshops and get valuable feedback on their works in progress. It’s a holistic approach to learning about theater. 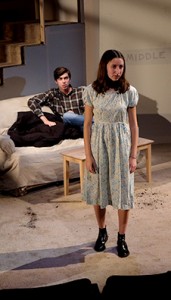 “The goal of the lab,” Sullivan says, “is to provide a practical immersion in making theater that complements the more academic experiences students have during the year, with a particular focus on bringing students to the work of visiting artists and returning alumni artists.”

As a Williams student, Sullivan participated in the Summer Theatre Lab when it was still new, and it helped her realize her passion. In 2009, she and other alumni founded The Satori Group, a Seattle-based experimental theater company.

Now she guides students through their own experiences, in hopes of igniting in them what was ignited in her during the Summer Theatre Lab. “I try to give them exposure to a diversity of things,” she says. “I encourage them to be thinking what kind of artists they want to be and what kind of work they want to do.”

The Story Behind Sharknado
Ilvermorny on Greylock