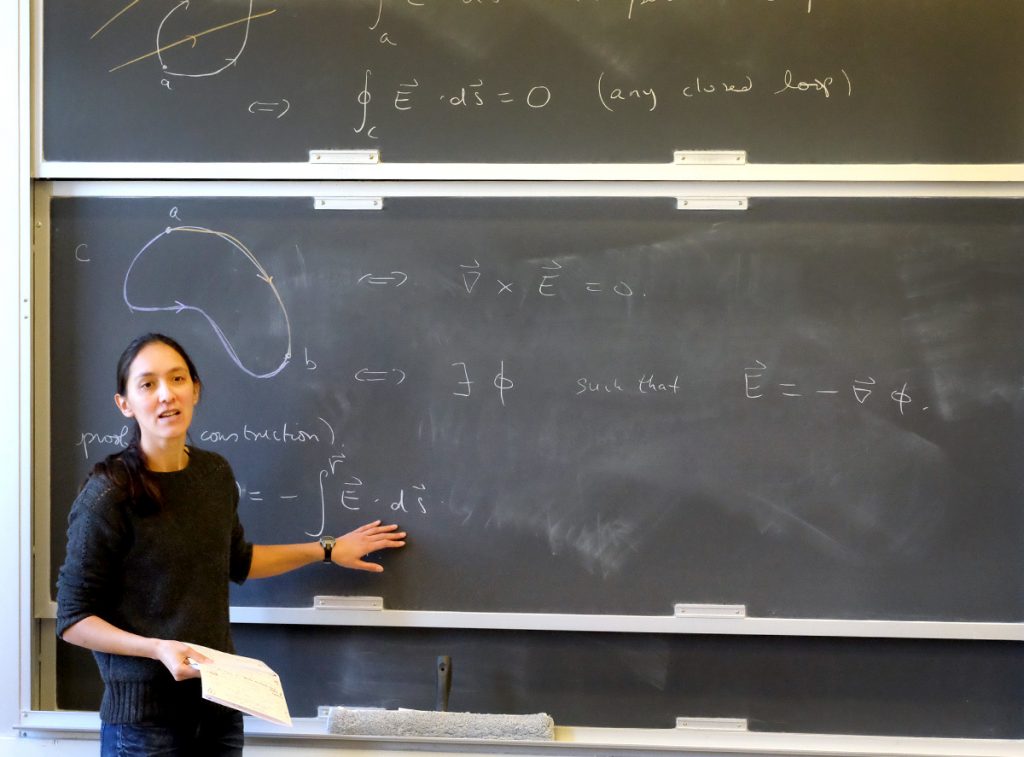 With the departure of three long-time members of the physics department and the arrival of three newcomers, physics at Williams is in the midst of a transition. Physics professor and former dean of the college Sarah Bolton was named president of the College of Wooster, a post she took up this fall. And at the end of this year, professors Jefferson Strait and William Wootters will both retire.

Coming in the door over the next year are three new faculty members. Catherine Kealhofer arrived this fall and is teaching Electricity and Magnetism this semester. Kealhofer, an experimental physicist, recently completed postdoctoral research at the Max Planck Institute for Quantum Optics in Germany. Her work involves the development of tools for ultrafast electron diffraction.

“In ultrafast physics, we’re trying to get insight into processes that happen on the time-scale that atoms are vibrating in solids,” says Kealhofer, who earned her Ph.D. at Stanford University. “These vibrations might happen a trillion times a second—a rate that is almost difficult to imagine.”

To get a picture of ultrafast changes, Kealhofer develops tools for making ultrafast electron pulses. “A next step in electron microscopy is to be able to look at atomic-scale structure as it changes,” she says. To do that, she develops short-pulsed electron sources that can provide a picture of the process at a specific moment.

“When you take a photograph of something that’s moving fast, and your shutter speed isn’t fast enough, the image is blurred,” she says. “One way to get around that is using stroboscopic illumination, where your shutter stays open in a dark environment. The state of the system during the brief flash is what’s recorded.”

Kealhofer likens a regular electron microscope to the camera with the slow shutter. The continuous electron beam generates a blurry image of a process as it’s happening, but short electron pulses can record a sharp picture of the changing system. “This technique lets us watch a movie of a phase transition, such as the melting of a solid,” she says.

To generate these short electron pulses and observe what’s happening at ultrafast time scales, Kealhofer has to set up her research lab. “Setting up a lab at a small college is challenging because on day one you start with an empty room,” says physics chair David Tucker-Smith. “Undergraduates can be very helpful—and it’s an extraordinary experience for them—but they have to be trained. We were excited to find stellar faculty with ambitious lab programs and the talent to mentor students in establishing those labs.”

Next to arrive in the department is theoretical physicist Swati Singh, who comes in the spring. Singh earned her Ph.D. at the University of Arizona and was a postdoctoral fellow at the Institute for Theoretical Atomic, Molecular, and Optical Physics at the Harvard/Smithsonian Center for Astrophysics. She will teach Statistical Mechanics and Thermodynamics.

“Singh’s research output is quite broad in scope, encompassing theoretical studies of quantum effects in disparate physical systems,” says Tucker-Smith. “Most recently she and her collaborators have been investigating the possibility of using superfluid helium to detect gravitational waves.”

And next fall, Kate Jensen will arrive after completing postdoctoral research at ETH Zurich. Jensen, who earned her Ph.D. at Harvard, is an experimentalist who is interested in probing materials in order to better understand them. “Jensen’s work has an applied bent and will be interesting to a broad range of students, including some who might want to go into engineering,” says Tucker-Smith.

“Each of these faculty members brings a new focus to the physics department, complementing the research currently being done here, and also adding to it tremendously,” says Tucker-Smith.

“At a time when women continue to be underrepresented in physics, it is especially exciting to have hired three such talented women,” says Dean of the Faculty Denise K. Buell. “We are delighted to have been able to hire them as a cohort.”

President Maud S. Mandel has announced plans for the fall 2020 semester. More details here. Please note that all Williams College buildings are closed to the public until further notice.