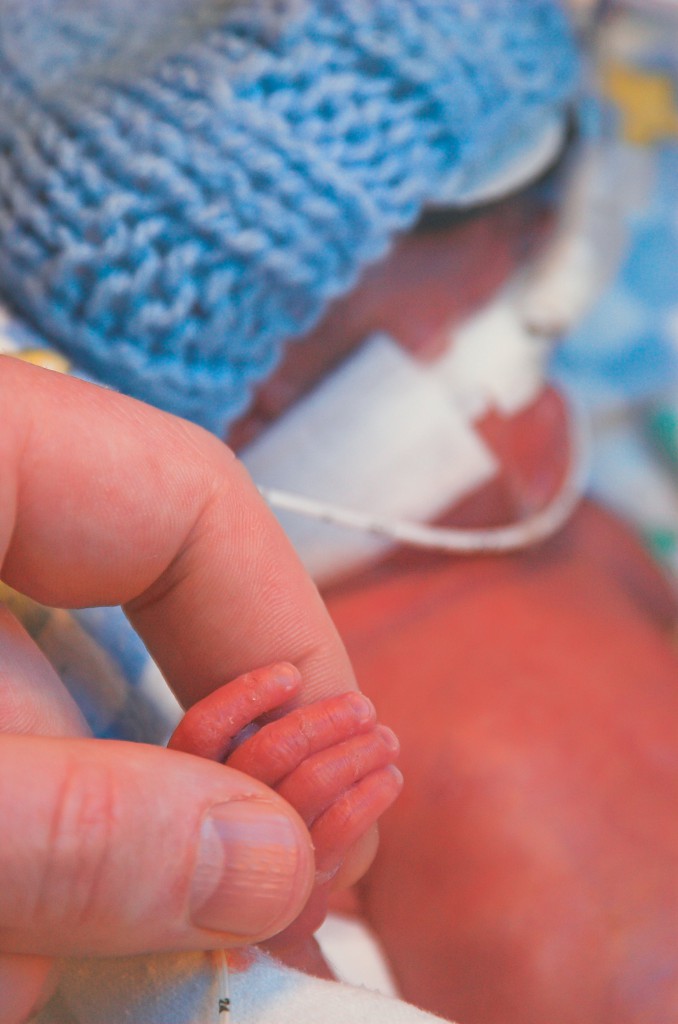 On any given day in associate professor of psychology Amie Hane’s Early Experience and Physiology lab, students are gathered around a TV monitor, reviewing video of mothers and tiny infants. They stop the recording every few seconds to take note of the slightest change in glance, touch, or tone of voice.

Hane’s students are coding hours of video recorded during a randomized controlled trial comparing standard neonatal intensive care with a program called Family Nurture Intervention (FNI) at the New York Presbyterian Morgan Stanley Children’s Hospital in New York City. FNI is one of multiple studies being conducted by the Nurture Science Program (NSP) in the Department of Pediatrics at Columbia University Medical Center.

“The FNI is aimed at facilitating an emotional connection between mother and infant in order to improve the emotional behavior of both, and the neurodevelopment of the infant,” says Hane, who was recently named director of the NSP’s Human Behavior Coding Laboratory. Her research with full-term infants reveals that sensitive maternal behavior early in life serves to promote healthy neurological development—effects that persist into early childhood.

Mothers and infants enrolled in the FNI study were observed in the NICU and continue to be followed over time in this longitudinal research program. Hane and her students have developed and implemented systems to code mother-infant behavior across time and in a range of situations designed to elicit emotion. This allows them to measure maternal sensitivity and the degree of emotional connectedness in the mother-infant pair.

“We are so grateful for the life-saving intervention of the NICU,” says Hane. “But it makes it hard for mothers to establish an emotional connection with their baby from the word ‘go.’”

A baby weighing just over a pound is too small to hold and is attached to a host of life supports, making something as simple as a diaper change an extremely complicated endeavor. Most NICUs are laid out in an open-bay, where the health issues of hospitalized infants are openly discussed in front of any and all visiting family members. The monitors attached to each infant beep and sound alarms with startling frequency.

And while many of the barriers to emotional connection are physical, they don’t end there.

“It’s not uncommon to see empty chairs at the isolettes,” Hane says. “Mothers often report feeling disempowered as medical staff—not mom or dad—provide specialized care for the infant. It can be hard to encourage them to spend time in the NICU, a problem further complicated by a lack of paid family leave at jobs to which they must return and the presence of other siblings at home.

“The NICU is a violation of expectation for pre-term infants as well,” she adds. “If not born early, these infants would be protected inside the shelter and natural life-support offered in the womb.”

According to Hane, “Premature birth disrupts many of the biological mechanisms that normally create an emotional connection between mother and infant.” FNI works to compensate for that disconnect, helping mothers and infants establish a “calming cycle” routine. The program includes a scent cloth exchange, skin-to-skin care, comfort touch, vocal soothing, and eye contact, all of which are designed to promote both emotional and physiological connectedness.

“Our recently published findings show that FNI increases maternal sensitivity in the NICU,” Hane says. “What’s more, follow-up data show that four months after discharge, mothers are at lower risk for depressive and anxiety symptoms, and there is a lower risk in infants for autism and attention problems at 18 months.”

Hane hopes her lab’s coding research, together with other evidence gathered in the trial, will help change the ecology of neonatal intensive care units more generally. “There’s no greater reward than helping these vulnerable infants not just survive, but thrive,” she says.

Hane’s collaboration with NSP at Columbia provides a unique opportunity for Williams students. “The students in my lab conduct a broad range of research that integrates developmental and clinical psychology, neuroscience, behavioral pediatrics, and public health,” she says. “The FNI collaboration is particularly exciting; as this work offers an incredible educational experience right here on campus with a team of world class researchers working with a population they wouldn’t otherwise have the chance to learn about.”