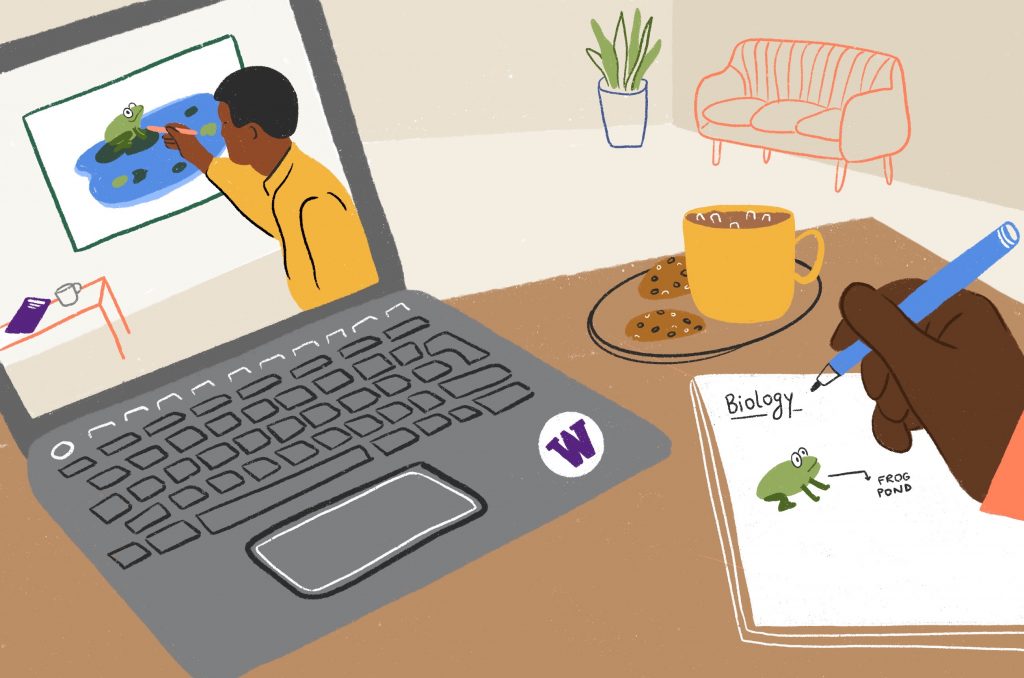 When the campus closed in mid-March and learning moved online, Williams professors found silver linings, made space for grief and tested ideas that may inform how the fall semester unfolds.

What is education when we can’t physically be together? Which elements are essential, and which can—or must—fall away?

In the middle of March, when the campus community was informed that the spread of Covid-19 would require students to leave campus a week before spring break and take up remote learning, most of us didn’t know the answers to those questions. Professors and students spent their final in- person class sessions holding that uncertainty as a group and then said goodbye, not sure when or if they’d see each other again. Then faculty members hunkered down for three weeks before the semester restarted to learn new technologies and, in some cases, entirely re-tool courses that were almost halfway complete.

Some courses, such as English or sociology seminars, transitioned online with relative ease. Readings and videos moved online, if they weren’t already, and professors used platforms such as Zoom for live videoconferencing. Other courses that previously required gathering in the chemistry lab or being on stage together to act or perform music looked very different after spring break.

As soon as the campus closure was announced, Denise Buell, then dean of faculty and Cluett Professor of Religion, encouraged faculty members to adapt their courses in ways that felt comfortable to them. She reassured them that it was even possible to teach remotely with “minimal technology,” relying solely on email to send and discuss readings.

Buell and her colleagues also provided remote instruction guides with pedagogical resources and suggested tools for virtual instruction, inviting faculty to consult with the Office of Information Technology and the Academic Resource Center. Platforms professors might never have heard of, such as Panopto—which allows for a simultaneous video lecture, virtual chalkboard and a series of slides—became integral tools for some. Other resources they had long used, such as Glow, Williams’ online course management system, found new and deeper importance in their daily lives.

But the challenges of moving courses online were still considerable. Janneke van de Stadt, the chair of German and Russian and professor of Russian, was also teaching Elementary Spanish in the spring. The course requires drilling vocabulary and grammar rules, and van de Stadt says her 20 novice students “were very much part of a fellowship, which is what happens in first-year language instruction. We occupy the same physical and intellectual space five days a week.”

Click through the gallery to read how some professors approached remote teaching.

Once the campus closed, van de Stadt knew that a 20-person Zoom class would be near-impossible to manage. Her students were spread across multiple time zones—one of the reasons Buell advised against live meetings when possible. Adds van de Stadt: “A Zoom call with that many people just isn’t effective.” So she divided the class into small groups based on their locations and combined live teaching sessions with small group practice meetings.

While van de Stadt focused on the structure, Shanti Pillai, assistant professor of theater, changed the scope of her course, The Expressive Body. Aimed at helping students “develop the body’s capacities for expression and reflect on the experience of movement,” according to the catalog description, the class met in a studio in the ’62 Center for Theatre and Dance during the first half of the semester. Pillai worked with her 12 students on what she describes as “strenuous psycho- physical acting exercises” and offered them immediate feedback. More important, she says, students provided feedback to one another: “We learn more from watching our peers than from doing an exercise.”

Live videoconferences were not optimal for such work, says Pillai, in part because students were scattered across time zones, and access to the internet was uneven. She also couldn’t envision students spending so much time engaging with each other via computer. “You can’t sustain someone’s interest on a screen for two hours at a time, twice a week, week after week,” she says.

So when the campus closed, Pillai sent students audio prompts they could do in whatever space they had at home, at whatever time made most sense to them and their families. “I did the majority of my studio work in my nephew’s playroom,” says Eddie Wolfson ’23, who went home to Tarzana, Calif., where his parents babysat while Wolfson’s sister and her husband worked. “I pushed the toys into one corner and worked between the beds, which gave me enough space, but occasionally I’d get interrupted by family.”

Students recorded videos of their assignments and uploaded the files to the course’s Glow site. Then they each viewed their classmates’ videos and gave written comments and feedback. Partway through the second half of the semester, Pillai added optional Zoom meetings “to punctuate the asynchronous with some kind of periodic engagement that could tether them to one another in some way,” she says.

“I did not engage in any pretense that what we did in the second half of the semester would be anything like what we were doing before,” Pillai says. While she hopes the work was fulfilling and productive—she told her students they would come to know things about themselves and the world differently than they did at the start of the course—“That can never be the same as being in the classroom or studio together,” she says. “And I never pretended it would be a direct translation.”

Peter Murphy, the John Hawley Roberts Professor of English, felt the difficulty of that indirect translation quite deeply. Having been at Williams for 34 years, he was teaching Introduction to the Novel for the third time this spring before his retirement at the end of the academic year. The lecture course, which had almost 80 students, is what Murphy describes as an old model. “It’s an opportunity for people to have contact with the study of culture and old books without the pressures of seminar—you just come and listen.”

He described what felt like a palpable energy in the room when they were all together. “I knew where they sat, how they were feeling, how much reading they had done, what they laughed at,” he says. “We were having such a good time.”

When the course moved online, Murphy’s first impulse was to record lectures. “But as soon as I completed a couple, I realized that, without the electricity in the room, no one can pay attention to a lecture about one of these really old books for 50 minutes.” So he decided to switch to 20- to 30-minute podcast-style presentations along with a shared Google document of important quotes and reflections on the book. “It’s hard to bring your expectations down to whatever substitute we figured out,” he says. “Teaching my last in-person class at Williams months before retiring, that was a really sad day.”

Grief was a common sentiment among Williams faculty suddenly separated from their students. It was also a central theme of sociology professor Christina Simko’s course, Being Mortal. In it, 21 students explored questions about how we cope with mortality and how that influences our social institutions.

“The readings for the last in-person session happened to be about how social expectations surrounding grief don’t just shape how we act but also how we feel,” Simko says. “We used the readings as a way to begin grappling with the grief that we were all experiencing: at the loss of companionship, the loss of rituals, the loss of place.”

Liz Webber ’20, a psychology major who went home to Natick, Ma., says this helped ground her in the reality of what was happening, both at Williams and globally. “The class allowed space for uncertainty,” she says. “The honesty that existed in the acknowledgement of both the positive and negative elements of the current situation allowed me to put the present moment into perspective and to think and engage with the world more critically, even though it was unsettling.”

Simko says the class, which she has taught before, confronts questions that are intellectually, emotionally and existentially difficult, and “After students left campus, it was essential to maintain that intangible sense of trust and community that provided a foundation for engaging in them.” She offered two weekly, live classes to allow for students in different time zones to engage. The class also maintained a Glow discussion to provide another outlet for reflection and meet the needs of those who couldn’t, for whatever reason, join the calls. It was, she says, a thin substitute for being in the classroom together.

“I am still grieving the time that we lost together, and I still largely refuse to search for silver linings,” Simko says. “But I am grateful for the students whose analytical acumen, emotional resilience and remarkable wisdom did so much to sustain me in these difficult times.”

Van de Stadt felt a similar sense of grief at what was lost, but she points out that she learned something about her own teaching: “I spent a good deal of the spring asking myself questions about what I found important before, and why.”

Testing was one thing she let go of. “My approach to the structure and goals of tests had always been that they were learning tools, that they not aim to find out what students don’t know but what they do know,” van de Stadt says. “Despite that, I knew the format could cause stress and feelings of shame even before this unusual semester. During it, I wasn’t willing to add that to my students’ plates.”

Rather than short, frequent closed-book tests and quizzes, van de Stadt chose to assign students longer, open-book exercises that focused on a week’s worth of work. “I found that the majority of students could see immediately if a concept they thought they understood was a bit shaky or even a pit of confusion,” she says, adding that when students could review their notes and make necessary changes, the exercises became about ongoing learning. “I will shift to this model from here on out, even when we resume in-person teaching.”

Though most faculty say they learned something profound—about their pedagogy, their curriculum, even their ability to be flexible and adapt—during the second half of the spring semester, many long to return to in-person teaching—or at least a combination of in-person and online instruction—in the fall. On June 29, President Maud S. Mandel announced that the college will resume classes in the fall in a re-imagined way, with extraordinary public health measures in place for everyone’s protection.

Some students will return to campus, and some will continue to learn remotely. In a letter to the campus community, she wrote: “I’m eager to welcome our community back. As beautiful as this campus is, Williams without people just isn’t Williams. To do this responsibly will require significant adjustments to the ways we live and learn, and sharing the commitments and sacrifices needed to protect each other. When in doubt we’re going to err on the side of caution, because what’s at stake is the health and wellbeing of our extended community, to which we all have a collective responsibility.”

Echoing those sentiments, Pillai says, “When we sit together in a classroom, we have the supreme privilege of doing something as beautiful as thinking about ideas. “That privilege comes with responsibility not just to the self, but to everyone in the room.”

Julia Munemo is a contributing writer to Williams Magazine.