Jim Shepard’s The Book of Aron 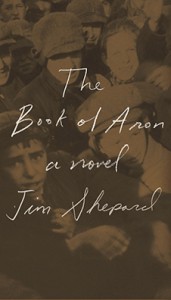 Jim Shepard’s new book, The Book of Aron, tells the story of a Jewish boy growing up in poverty and desperation. It begins before the Germans invaded Poland and, through Aron’s eyes, takes us from the Polish countryside into the depths of the Warsaw Ghetto and then into the famous orphanage for destitute children run by the real-life Janusz Korczak.

“We all become mute in the presence of the Holocaust,” says Shepard, the college’s J. Leland Miller Professor of American History, Literature, and Eloquence. “We all become idiots—or children—in the face of that kind of extremity of suffering, and so when I conceived of this book, I thought why not start there?”

Aron could be considered, in some central ways, to be an “idiot.” He doesn’t do well in school, he doesn’t listen to his parents, he isn’t always kind to the weak or the ill. Yet he narrates his guilt and regret about his behavior with the same bald honesty that he uses to describe the building of the walls around the ghetto or the abuse he and his friends suffer at the hands of the police.

The idea for the book was sparked by an email from a former student who thought the orphanage in the Warsaw Ghetto—and its famous director, Janusz Korczak—would be perfect subjects for Shepard. “I’ve always been fascinated by catastrophe,” says Shepard. “And I’m interested in human complicity and ethical passivity in the face of catastrophe.”

Korczak was anything but ethically passive. Known throughout prewar Europe as a staunch advocate for children’s rights and education reform, he was a doctor, educator, radio talk show host and prolific author. Though he’d planned to retire in what would become modern-day Israel, he instead remained with his charges throughout the Nazi invasion and ultimately marched with them to the Treblinka death camp.

“So how do you write about a saint?” Shepard asks, explaining why he—at first—rejected his student’s suggestion. “It’s easier to imagine the worm’s eye view of history, which is the view most of us have, anyway.”

It wasn’t until he read about a boy who came to the orphanage and screamed for three straight days that he found his way into the story he wanted to tell. “It was a very bad time at the orphanage, Korczak couldn’t have a child screaming non-stop,” Shepard says. “So how did he deal with the boy?”

Shepard says he’s impatient with the revisionist view of history that asks how the Jews couldn’t have known what was coming, and he wanted the novel to contribute to that conversation. “What was coming was so unbelievable, so unprecedented,” he says. “I wanted to build on the tension between what the reader knows and what was opaque to those in the historical moment.” That created an aesthetic problem in the book that, he says, “I hope I solved.”

Read a review of Jim Shepard’s new book, The Book of Aron, in The Washington Post.