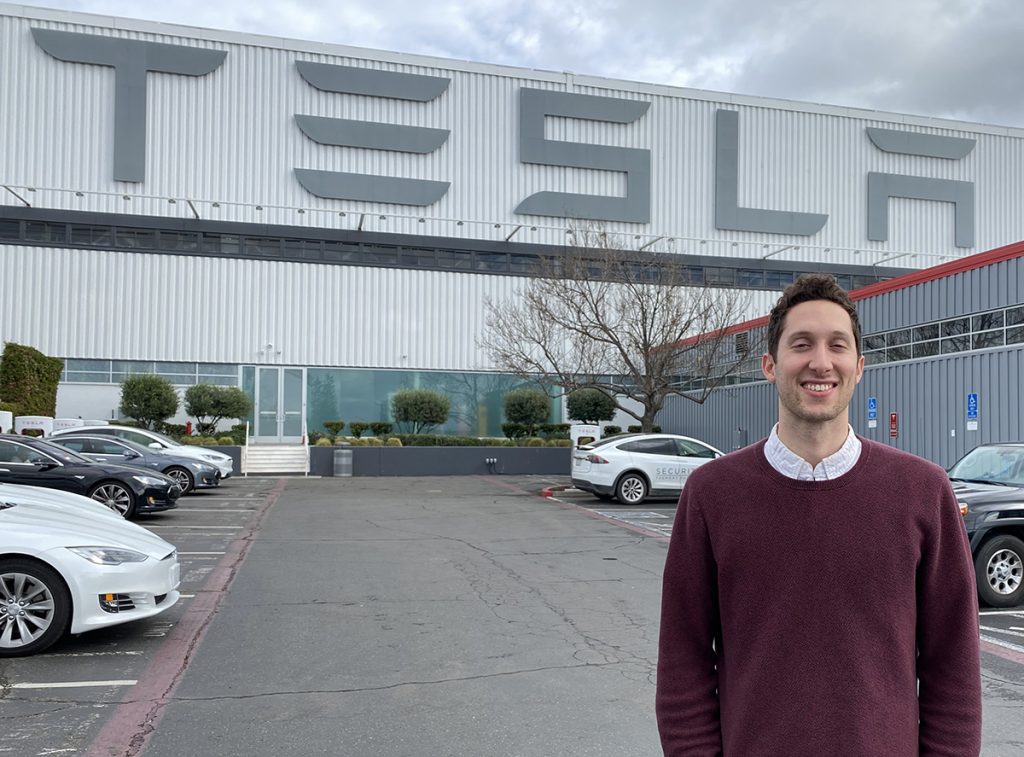 As an economics and history major, Dan Wohl ’15 didn’t always expect to go into a career in sustainability, but a summer internship at Goldman Sachs changed that. He worked on a fund investing in energy infrastructure and came back to Williams eager to learn more. He took a winter study course on sustainable business strategies that he says “showed me how to pursue a career built around deploying more clean technology and contributing to a more sustainable future.”

That’s the work he does every day now at Tesla, the electric vehicle and solar company whose mission is to accelerate the world’s transition to sustainable energy. He started on their business development team and recently moved into a role in finance. And the path he took to working at Tesla was a bit unconventional.

Wohl played basketball all four years at Williams. After his senior season, he was recruited to play professionally for Hapoel Gilboa Galil, a team based in northeast Israel. Faced with the choice between returning to Goldman Sachs full time and playing the sport he’d loved since childhood, he says “I decided playing pro basketball was a one-time opportunity and that a more traditional career could come later.”

Wohl lived and played basketball in Israel for a year, an experience he’s grateful for in part because he hadn’t studied abroad as a student and because, as a Jew who had not before traveled to Israel, he found himself forming connections with a place and people who had before only held a spot in his imagination. “But after one season, I was ready to move into what I knew would be my long-term path,” Wohl says. “My experience in such a politically intense country helped me see policy as a lever to implement change.” Wohl adds that the more he learned about climate and public health, the clearer it became to him that “innovative change needed to happen now.”

In 2016, Wohl moved from Israel to Washington D.C. to work for the Senate Committee on Energy & Natural Resources. “I thought working on Capitol Hill would put me in a position to better understand how federal policy was designed and potentially help move meaningful climate legislation,” he says. After the presidential election later that year, he began looking for opportunities elsewhere.

“I started thinking about who would step up on energy and environmental issues,” Wohl says. “It didn’t take long to realize that Tesla was an organization doing as much or more than any other.” Wohl reached out to a Williams alumnus working at Tesla at the time, and soon landed an interview. Not long after that, he moved to San Francisco to join the team.

“I wanted to work for a company that was positively impacting the world to address an important problem,” Wohl says. “And I’m proud to be part of a team with such ambitious goals.”

The Feeling of Williams
Writing from Melancholy