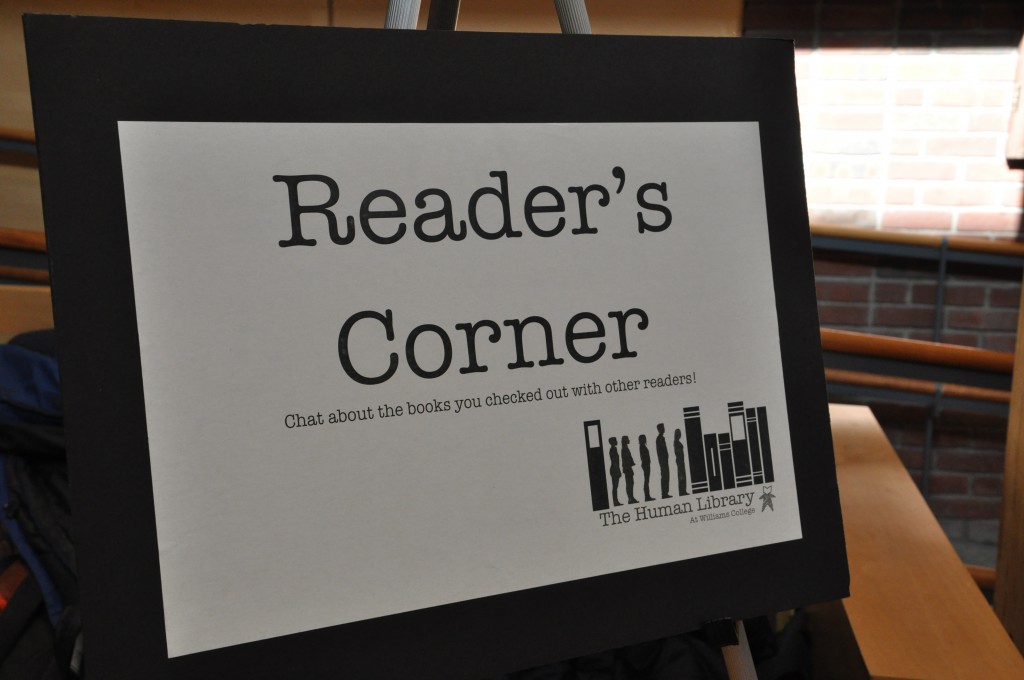 Checking out the Human Library

We often roll our eyes at those who claim that a favorite work of art or book “speaks to them,” but last week at Williams, that cliché took on a vibrant reality. Students, faculty, and staff had the opportunity to participate in the Human Library, which was originally founded in Denmark in 2000 to promote difficult dialog and facilitate social cohesion.

The project, which now enjoys an international community that includes Australia, Lithuania, Spain, and Turkey and has been present at Williams since 2012, allows “readers” to “check-out” human books that seem interesting to them and engage in conversation with their chosen book for up to 20 minutes at a time.

When I approached the visual “catalog” in the center of Paresky’s Baxter Hall, I was able to choose from among 40 or so separate books with titles like “Shaman,” “WWII Veteran,” and “Beekeeper.” I chose the latter title as my first selection, and I was escorted up to the second floor of Paresky where I met my book: Lani Willmar ’15. She began our conversation by showing me her beekeeping tools, which included a protective cloth body suit and an air-pressure powered smoker used to sedate the bees while transporting them or tending to their hives. Willmar, whose interests in food policy and the environment led her to the unusual hobby, was awarded the Lawrence D. Levien 1968 Journalism Summer Fellowship last year for a project that allowed her to study the causes and impacts of diminished bee populations in North Dakota, California, and Argentina.

This trend, known as Colony Collapse Disorder, can negatively affect families whose livelihoods depend on generations-old beekeeping companies, and it can indirectly threaten other agricultural industries whose products (almonds, for example) require bees for cross-pollination. Willmar’s dedication to her craft is apparent—after all, she endured 15 bee stings at a North Dakota site after her journalistic project became slightly more hands-on than she had expected—and though her ultimate goal is to become a global food specialist, her work with bees may well continue. She is currently a finalist for the Chandler Fellowship, which would allow her work and live with female beekeepers in China, Turkey, Brazil, the UK, and India for up to a year after graduation.

I thanked her after our time was up and made my way back downstairs to the catalog, where I quickly selected my second book: “Libertarian.” After hearing many of the negative misconceptions associated with this sociopolitical ideology, I was pleasantly surprised to hear from my book (who wishes to remain anonymous) that the fundamental premise of libertarianism is not negative at all. The school of thought, he told me, is based on the principles of non-violence and avoidance of coercion by force.

My book explained to me that libertarianism’s true essence lies not in its real-world implications, but rather in its moral underpinnings. He spoke of Gandhi, a man universally admired, as a true libertarian; this surprised me, and it forced me to think more deeply about a philosophical approach to the world that many have denounced as crazy or invalid. This challenging conversation encouraged me to check out one more book before I departed.

That third book, simply titled “Pre-Med,” turned out to be Ali Tafreshi ’15. He and I had been friendly in the past, but I was excited to dig deeper into his reasons for pursuing medicine. He told of a time in second grade when he was asked what he wanted to be when he grew up and responded, “pediatric cardiologist. I didn’t even know what that was at the time,” Tafreshi said with a laugh.  Since this proclamation so many years ago, Tafreshi has gained both experience and direction.

He told me about his time volunteering in a medical clinic in the Dominican Republic over spring break last year, where he met a young patient with Scabies. “He looked up at me with these big, sad eyes and I realized in that moment that his hope rested in me,” Tafreshi said. “At the time, I couldn’t do much to help him, but that responsibility for the health of others is the one I want to have in the future.”  He’s well on his way to assuming that responsibility; he’ll be starting at the University of Southern California Medical School in the fall, where he’ll have the opportunity to apply his Williams education to the challenges of human health.

Tafreshi says that the most important lesson Williams has taught him is “to think of nothing as impossible, whether it’s a cure for a disease or something else entirely. Anything is possible if you’re passionate about it.”

The words and messages of all three of my books rang loudly in my ears as I walked out of Paresky. I’m not a beekeeper, a Libertarian, or a pre-med student, and therein lies the value of the Human Library: those who are most different from us are those who can teach us the most.