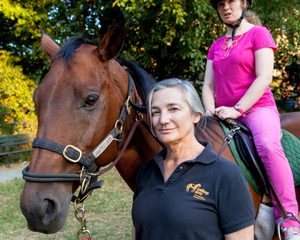 Kershaw started riding when she was 5 and fox hunting when she was 8, but as time went on she had less time to devote to formal lessons. At Williams she majored in economics and history and then earned a JD at Yale. She began a career in corporate law in Washington, D.C., where she and her husband lived until 1998, when her husband got an offer he couldn’t refuse: a five-year gig in Hong Kong.

“I assumed I’d go back to my law career when we got back to the States,” says Kershaw, who was excited to live abroad with their three children for a while. “My circumstances in Hong Kong didn’t allow me to work regularly, so I joined the board of the American Women’s Association there.”

That’s when she first heard about therapeutic riding. “I made a practice of volunteering in the organizations we supported,” she says. “When I found out about this horse-based program, I had to check it out, even though I hadn’t been on a horse in years. And it was unbelievable.”

Kershaw got involved with the therapeutic program immediately. She exercised horses and soon was sticking around afterward to volunteer with the children. “We had kids on the autism spectrum, visually impaired kids, kids with Down Syndrome,” she says. “I learned a lot, I saw a lot—and the experience really stuck with me.”

Back in the States in 2003, Kershaw realized something had shifted for her. “I just couldn’t make myself go back to practicing law,” she says. The family relocated to New York City, where they had never lived before, and within a few months she was volunteering at a therapeutic horsemanship program there. When she saw how the need for such programs outstripped the available offerings, she and a group of volunteers decided to start their own. 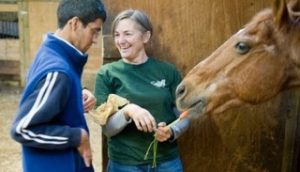 Today GallopNYC serves more than 500 children each week through school-based programs—where the kids come as part of their curriculum—and individual lessons. It works, Kershaw says, because “a horse is the perfect physical therapy tool. It provides 360-degree movement and responsive input, and it’s warm.”

Kershaw points out that the children who come to GallopNYC don’t have very many opportunities for autonomy, because adults work with them on most tasks. “And that’s exactly how it should be, most of the time,” she says. “But you put a kid like that on a horse… They immediately feel the horse responding to them, and it’s very affirming and motivating.”

Lessons are designed to help riders live their lives as fully, independently and productively as possible. “We use a five-point life skills assessment scale,” Kershaw says of GallopNYC’s evaluation system. “I’d say 80 percent of our kids progress at least one or two points on at least one of their goals in a 10-week session.”

After years of renting space at stables in the Bronx and at Prospect Park in Brooklyn, GallopNYC recently expanded into two barns of its own in Queens and serves children from all five boroughs. Kershaw and her team pushed for the expansion because of the large number of children on their waiting list—about 600 at latest count.

“We have something that really works for our riders,” Kershaw says. “We see that kids are speaking more, they’re able to focus more, or sometimes they’re just having more fun. I’ve had teachers say to me that they wish every kid in their school could go through our program because they see that the kids are calmer, more social and able to write more. I want to make this program as widely available as we can.”

Kershaw’s work as executive director means she now spends most of her time fundraising and working on strategic planning, but she stays connected to the kids in the program by teaching lessons. And she still finds a way to get out on a horse herself, as a member of the NYC Mounted Parks Enforcement Patrol Auxiliary. “Just as our riders do, I find horses calming, and I enjoy being around them,” she says. “It’s been great to come back to horses after such a long time.”