Food and Farming in Vermont

Mari Omland ’89 stands among a cluster of sparkling, snow-covered trees, shaking a bucket of grain for the 12 goats trotting behind her. Out for some exercise, they’re distracted by the evergreens and adoring Williams students surrounding them. But Omland skillfully coaxes the animals back to the barn.

It’s the students’ last day at Green Mountain Girls Farm (GMG) in Northfield, Vt., part of an eight-day immersion into farm life and the food system in Vermont, a small state acting as a leader in the local food movement. The visit was just one highlight of the Winter Study course The Food Workforce: Learning and Labor in the Vermont Food System, led by Omland and Mike Evans, assistant director of Williams’ Zilkha Center for Environmental Initiatives.

“The intent behind the course was to immerse ourselves deeply in a corner of a seemingly vibrant local food system, to explore its complexity, and to understand the labor behind our food, small farm viability, and how we value farmers’ time, the land, and their products,” says Evans.

The class was made up of four freshmen and five sophomores, most of whom are involved with environmental initiatives on campus. Before leaving for GMG, the group read up on farming and learned about the people and programs—including the Vermont Farm to Plate Program—they’d encounter during the trip off campus.

GMG, which Omland runs with her partner Laura Olsen, served as the group’s base. Home to two pigs, 12 goats, and about 70 chickens, it’s a small farm engaged in sustainable, “humaneitarian” practices. Omland and Olsen run a farm stand and welcome visitors for an immersion into farm life, hoping to educate them about the benefits of local food. 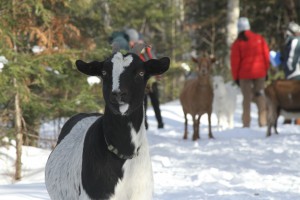 Students began each day helping take care of the goats, pigs, and chickens, and they participated in cooking classes using fresh local food. However, the bulk of their time was spent on farm visits and meetings with others working in the food system, including journalists, justice organizations, and authors.

The students met several Williams alumni working to improve the Vermont food system, including Liz Gleason ’08 at the Farm Viability Project in Montpelier and Christa Alexander ’95 from Jericho Settlers Farm.

The group also met with members of Migrant Justice, an organization dedicated to securing rights for migrant workers, who make up a large part of the workforce. Migrant Justice members discussed their “Milk with Dignity” program, which calls for better labor conditions from Ben & Jerry’s and its associated dairies.

The students synthesized what they learned into photo essays, magazine articles, and videos, among other final projects. Anna Harleen ’18 appreciated the chance to think out of the typical academic box, using photos and recordings taken throughout the week to tell the stories of the people the class met.

Louisa Goss ’19 hopes to use her project as a starting point to improve labeling in the college’s dining halls, providing students with information about where their food comes from. 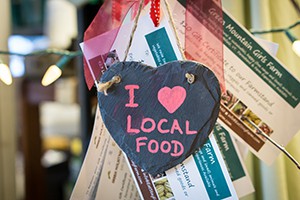 Michael Ding ’18 says the course changed the way he thinks about food and farming: “I became more aware of the complexities of the food system and the need for open and honest dialogue between farmers, consumer, activists, and so on. The small farm movement doesn’t seem to have succeeded in the way it intended, but perhaps it was never meant to save our food system. Perhaps it’s just a starting point and a place to incubate ideas.

“A transition in the way we talk about food may not be easy, and it’ll require a lot of empathy,” he says. “But I think we can do it. We have to if we want to save our food system.”

Natalie DiNenno ’18 participated in The Food Workforce: Learning and Labor in the Vermont Food System during Winter Study. This article is part of her final project.