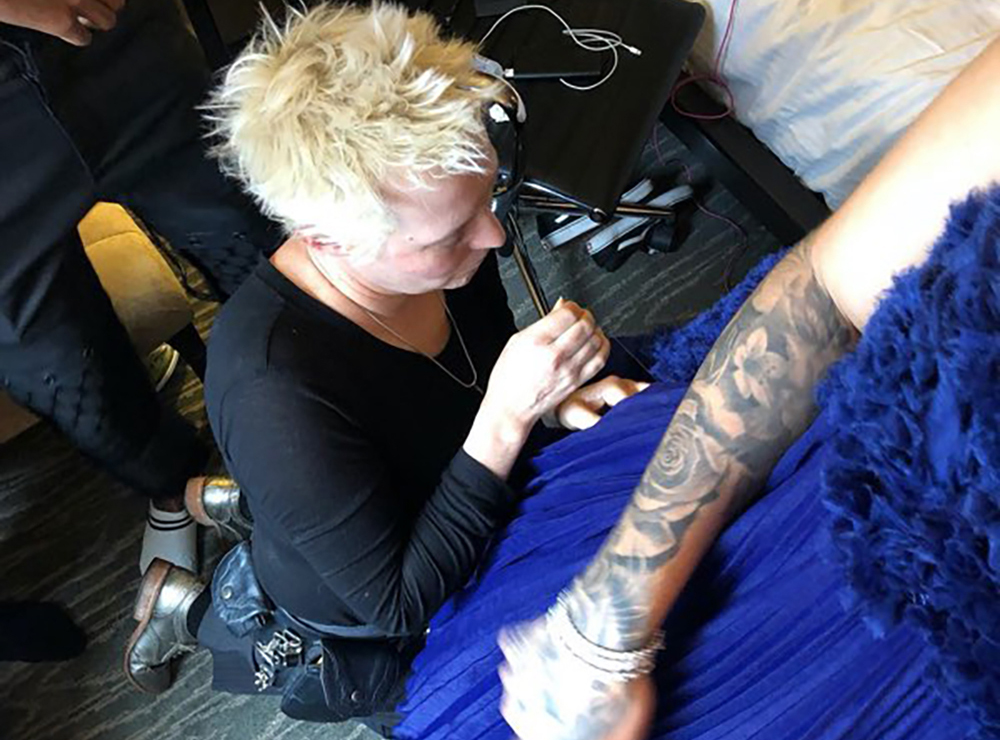 Some people want to follow a blueprint for their lives, planning each careful step along the way. Meanwhile, Allison Achauer ’93, tailor to the stars, says she prefers to fly by the seat of her well-made pants.

When she signed up for a course in costume design with Williams Lecturer in Theater Deb Brothers, Achauer had never operated a sewing machine. “I took it on a hunch,” she says, “and it spoke to me.” An anthropology major, she was immediately fascinated with the connections between the field and design—clothing being an important form of human expression.

After Williams, she stayed in the Berkshires to do some costume work with regional theaters, learning the ropes and gaining experience. She then pursued an M.F.A. in drama at Carnegie-Mellon. Another hunch took her to Los Angeles, where she knew she’d be closer to the jobs she saw posted in Variety and could escape the snow and cold weather of the East Coast. Plus, as a native Californian from Long Beach, it was closer to home.

It wasn’t long before she joined the costume shop at the Los Angeles Opera as a tailor and pattern maker, bringing to life the directors’ and costume designers’ vision for a show—literally building the costumes. While she says she’s not a huge fan of opera, she enjoyed working on the detail and the technical challenges, such as measuring the singers to accommodate lung expansion and building corsets to support the diaphragm, which is critical for unamplified singers. In one production of Cinderella, the performers wore outfits that Achauer described as looking “like a pile of ruffles,” but the design called for multiple widths of material to make zigzags, reflecting the story’s theme that things aren’t always as we expect them to be. “It’s a very problem-solving kind of job,” Achauer says.

Her work with the opera brought her individual clients, such as Hollywood designers and drag performers who needed help with alterations and troubleshooting, offering her opportunities to work independently. As a behind-the-scenes magician, Achauer doesn’t receive the name recognition of, for example, a fashion designer. However, her name has been passed around by word of mouth, and she says she hasn’t had to actively seek work since she started on her own; people just call her.

Click through the gallery to read about Achauer’s work.

She is often given very little notice for a job, and most work has to be completed in a short time frame. “A week would be a lot of notice,” she says. When Noah Cyrus, younger sister of Miley Cyrus, asked her to make a slinky gold, Kim Kardashian-style dress for a Halloween costume, Achauer got a day’s notice and finished the project in six-and-a-half hours.

Delivering stellar work quickly and never missing a deadline has garnered her a list of celebrity clients who appreciate her ability to bring their ideas to life, including Cybill Shepherd, Kanye West, Miley Cyrus, Ariana Grande, Jennifer Hudson, Kendrick Lamar, Jennifer Lopez and Britney Spears. For the 2019 Afropunk Atlanta Festival, she created a feather shrug that rests along the arms and made an exquisite wingspan for Johnny Venus from the Atlanta-based hip-hop duo EarthGang. For the 2020 Grammy Awards, she was asked to create for him a shirt with a plunging neckline of whisper-thin petals.

Two of her favorite clients, her niece and nephew, often benefit from Achauer’s expertise, dreaming up their own, custom Halloween costumes—from a classic Cinderella in blue with a pearl-studded latticework bodice to a multi-eyed bugaboo with sharp teeth, horns and a lolling red tongue.

Even in a year of theater shutdowns, Achauer has managed to stay busy—with precautions. At a September Savage x Fenty fashion show in Los Angeles, where she was doing preshow alterations, she was required to have three Covid-19 tests, wear a face mask and shield, and remain physically distanced in situations that would normally be more crowded, such as a communal ironing station. She schedules fittings outdoors, arranges contactless drop-offs and wears a mask when she must go inside someone’s home. After making a custom facemask with crystals for rapper 6lack that he wore in a music video for the song “ATL Freestyle,” she started selling made-to-order artistic masks.

Outside of the tailoring world, Achauer also does commercial photography and designs websites for authors. And she is teaching herself 3-D modeling, a handy skill to have when a costume needs a hard accessory, such as a sword or jewelry.

Despite unpredictable schedules and tight deadlines, Achauer says she finds security in knowing she’s come far enough in her career to be able to choose what she wants to do next. That means she sometimes says no to jobs that are less appealing. But when she accepts a project, she says, it’s her choice; “It’s my yes.”

At the Helm of Himal Southasian
Blurring the Boundaries