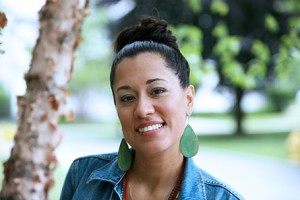 Acclaimed artist, poet, writer, and performer Mayda Del Valle ’00 returned to campus in June for a Reunion Weekend performance. Watching her on the MainStage of the ’62 Center for Theatre and Dance, it was hard to imagine that, just 15 years before, she’d been uncertain of her career path—and whether to finish her senior year at Williams.

“I was going through a rough time,” says Del Valle. “There were no classes I wanted to take, and I was frustrated by my fellow students’ disinterest in making Williams a better place.” In high school, Del Valle had been involved in community organizing, but at Williams she struggled to find a place for her activist spirit. After four years, she was close to dropping out.

But a friend intervened and convinced Del Valle that she was too close to the finish line to give up. In what would prove to be a turning point, Del Valle decided to complete an independent study in poetry and performance with Sandra Burton, the Lipp Family Director of Dance and Senior Lecturer in Dance. Burton became her mentor—not just in school, but also in life. And with her, Del Valle says she found her voice.

After graduation, Del Valle moved to New York City and started performing at the Nuyorican Poet’s Café. She became its 2001 Grand Slam Champion and went on to win the National Poetry Slam Individual title that year—the youngest person and the first Latina poet to do so. From there, Del Valle joined Russell Simmons’s Def Poetry Jam on HBO for six episodes and was a contributing writer and original cast member of the Tony Award-winning Def Poetry Jam on Broadway. In 2008 she received a Williams Bicentennial Medal for distinguished achievement.

Her performance at reunion combined song, spoken word poetry, and a conversation with the audience. “There is no fourth wall here,” she said, inviting people to sit on the stage with her if they liked. Much of the poetry she performed centered around Del Valle’s family and her childhood home on Chicago’s South Side, a place she says she feels calling her to return.

But for now, she’s living in Los Angeles and traveling around the world to perform and teach, including in Australia later this summer. When she’s in LA, she meets weekly with a group of incarcerated women, teaching a writing workshop and an African drumming circle. She also makes regular visits to high school classrooms in South and Central LA, teaching poetry to kids who otherwise aren’t receiving an education in the arts.

“The arts should be for everyone,” Del Valle says. “Yet there are no arts in schools anymore. Studies have shown that young people exposed to the arts think more critically, are more open to the world, and have better math and English skills.”

Del Valle is in the middle of an MFA program in creative writing at the California Institute of the Arts. She says she may someday come back to a place like Williams to teach.

“I realize now that I faced challenges students who weren’t first-generation college students didn’t face, and that was a struggle for me,” she says. “But life can lead you down paths and alleyways and roads that you don’t understand at the time. Williams gave me the space to explore and provided me with amazing mentors. I’m grateful for that.”