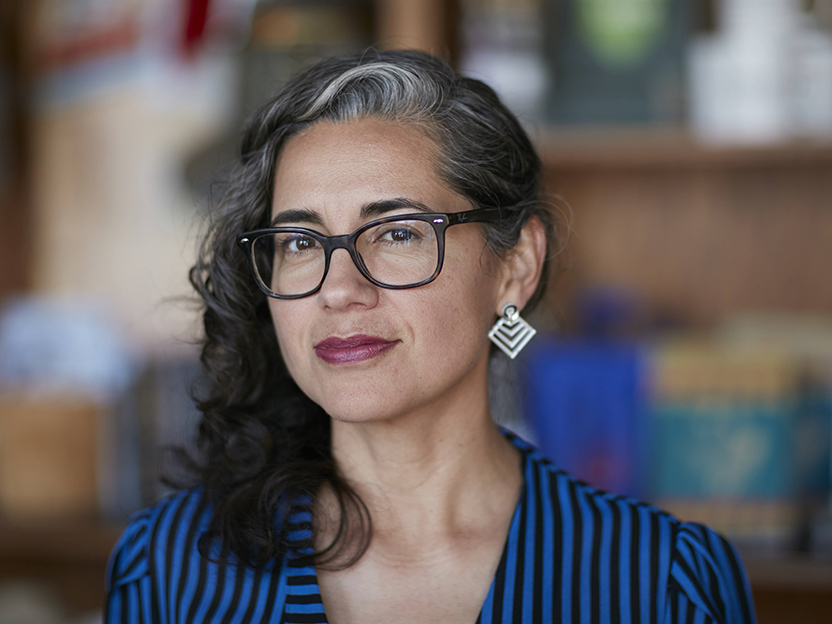 Finding a Path to Poetry

Late last year, Vickie Vértiz ’98 was awarded a PEN America Literary Award—Los Angeles for her poetry collection Palm Frond With Its Throat Cut (University of Arizona Press 2017). But Vértiz didn’t plan to become a writer. “As someone with a working class background, I didn’t see art making as a path to earning a living,” she says.

So while she wrote on the side, even co-publishing People’s Native Tongues, a zine at Williams, she majored in political science and went on to earn a master’s degree in public affairs at the University of Texas at Austin. She worked in social justice organizing for many years.

“But one day, working at a nonprofit devoted to economic development, I asked a group of people what they would do for work if they could do anything,” Vértiz says. “I realized I had to answer that question for myself, and the answer surprised me: I wanted to teach students how to make art as a form of self determination.”

It took another couple of steps—during which she worked as an arts administrator at an art college and in public schools—before Vértiz recognized that she wanted to do more than teach. “I realized that my own art could make a difference in the world,” she says. “I want my writing to show us that our own stories matter—those of us educated on the street and in our homes, not just in school.”

She started by taking writing workshops in the San Francisco Bay Area, and over the course of nearly a decade, she studied with many of her heroes: “people I had read at Williams, such as Cherríe Moraga and Ana Castillo.” Eventually, she enrolled in an MFA program at the University of California, Riverside and spent three years crafting and re-crafting a memoir. “On the side, for fun, I was also always writing poetry,” she says. “It’s funny that the book of poems was the first to be published.”

Palm Frond With Its Throat Cut is a series of portraits—of cities like her home Los Angeles as well as Mexico City and Paris, and portraits of rivers, freeways and people. The Los Angeles Review of Books says her “poems transform displacement and a polluted cityscape into sources of resistance and aesthetic restructuring … [making] meaning by breaking up the page and breaking down language to reflect the resistance involved in living as a queer person of color in the white-supremacist, capitalist, heteronormative United States.”

Vértiz says at its core, it’s a book about home. “Wherever you are, home is still with you,” she says. “When I was at Williams, home was ever-present because it was so absent.”

That journey between her home in L.A. to Williams forms the heart of her memoir-in-progress. “It’s about what my parents, who didn’t go beyond third grade, taught me about getting into and thriving at Williams,” she says. “It’s about having the right social skills to interact with people who are not like you, being brave enough to leave your family behind, and it sheds light on the resilience and brilliance of people who are dismissed.”

Of her recent recognition with the PEN award, Vértiz says: “With the current climate of xenophobia, sexism, homophobia and violence against so many communities, it’s important to celebrate a book about people who are being hunted down in the streets. This book and this award are celebrations of our survival.”