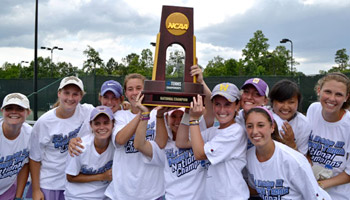 “It’s absolutely amazing,” Alotta said. “It’s just a testament to our whole team, and I couldn’t ask for a better way to end my career. I think it comes down to our team chemistry and the fact we’ve been able to maintain it. Everybody on this team fights so hard.”

Williams is now 7-2 overall in national championship matches and the first school to win seven national titles in women’s tennis.

“I’m a little in disbelief,” said head coach Allison Swain. “Every day of the tournament they came out and played better tennis. I know we’ve broken some records, but to me this is special because each group wins it in its own way.”

Celebrating the Class of 2012
A Season of Learning