For the past six weeks, Williams students Amy Berg ’14, Conor Dempsey ’13, Lydia Heinrichs ’15, Elvira Miceli ’13, Khanh Nguyen ’14, and Cathy Zhu, a graduate student in the history of art, have been chronicling their experiences at an archaeological field school in Omrit, Israel. 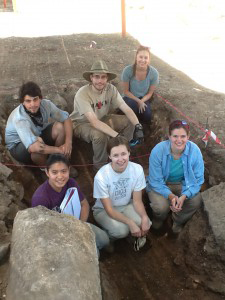 Co-directed by Benjamin Rubin, assistant professor of Classics at Williams, Williams in Omrit is an interdisciplinary learning experience open to all Williams students. Omrit is a Roman-era sanctuary site located in the foothills of Mount Hermon, just south of the modern Israeli border with Lebanon. Archaeological excavations began on the site in 1999 under the direction of Prof. J. Andrew Overman of Macalester College in St. Paul, Minn. Overman and his team have worked for 12 seasons to uncover the Roman sanctuary at Omrit. Their excavations revealed evidence that the Omrit temple was built by the Jewish king Herod the Great in the late first century BCE.

Future excavations at Omrit will focus on the urban context of the temple. For more information, visit Williams in Omrit.