WCMA at night? Drawing on the walls? It seems antithetical for a museum to host a DJ, offer a light show, and invite folks to draw on the walls. Or does it? This October, the Williams College Museum of Art opened its doors for a late-night evening of what Director Christina Olsen calls, “bottom-up, social, and informal learning.”

“WCMA at Night is designed to allow students and the community to own the museum and its programming to a greater degree, and to meet students and the public where they are,” Olsen explains. She sees WCMA at Night as shifting the tone of the museum from didactic and earnest to more playful and exploratory at a time of day when they are eager for it.

October’s event centered around thematic connections to the exhibition Sol LeWitt: The Well-Tempered Grid. Chicago-based artist Tony Orrico, who draws with his entire body, performed a live drawing that lasted four hours. Orrico’s work, which explores the geometry of motion, ties well with Sol LeWitt’s Wall Drawings, two of which are currently on view. Orrico’s performance became what Olsen called “an experience in what the human body, repetitive movement, and long duration can collectively produce as a drawing.” 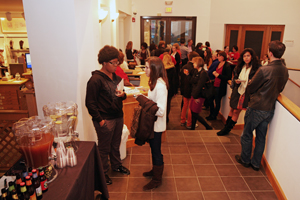 The evening also featured drawing games, a performance by Williams’ Contemporary Dance Ensemble, and a dance party with a LeWitt-themed light show in the museum’s historic Rotunda.

Junior Daniel Schreiner, a studio art and music double major, thinks that having the museum open late will create an opportunity for more students to have access to the exhibitions and programs that the college museum offers. “WCMA at Night gives the museum more visibility,” he says, “And allows the museum to connect more with the student body.” He added that more students are available after classes and that now students can “have fun and hang out at the museum.”

With this program, Olsen sees the museum as, “strengthening its muscles for experimentation.” WCMA at Night will continue on the third Thursday of most months. For more information, visit the museum’s event page.

Please visit the Covid-19 website for the latest information, including details about vaccination, testing and mask requirements, and policies for off-campus visitors.