Nine years ago, the Clay Mathematics Institute offered million dollar prizes for the solution to any of the seven “Millennium Problems,” among the most intractable, unsolved questions of mathematics. Frank Morgan, Webster Atwell ’21 professor of mathematics at Williams, thought this was wonderful.

For Morgan, the best part of the Clay Institute prizes isn’t the money; it’s the fact that the Clay Institute challenge showcases what high-level math is all about — creativity, exploration, and human ingenuity in the face of the unknown.

Morgan has explored the Millennium Problems, as well as other important questions of high-level mathematics, in a senior seminar, “The Big Questions” (Math 481). Last year, students selected their favorite questions. They spent the following weeks studying, discussing, and explaining them to each other. 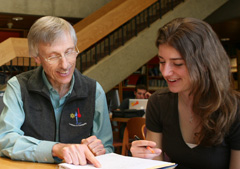 The questions themselves are dizzyingly complex, and they stump even the greatest mathematical minds. Among them are the Riemann Hypothesis, which seeks to explain the apparently random pattern of prime numbers; Yang-Mills Theory, which attempts to find the mathematical foundation for the strong interactions of elementary particles; and the Poincaré Conjecture, which asks the nature of the shape of the space in which we live.

Of all the questions, Morgan’s class this year ranked one of the Millennium Problems, the question of “P vs. NP,” as the most important open question in mathematics today.

“P vs. NP is a question about computational complexity,” says Morgan. “The question asks whether every reasonable short problem (NP) might have a short solution (P),” says Morgan. To explain, he points to the challenge of factoring an extremely large number — one that is at least hundreds of digits long. The question itself — how do you factor this enormous number? — is short. The answer, once found, is short and easily verified. However, factoring a number like this from scratch is an infuriatingly long task, currently done only by computer. If P = NP, then there must be some simpler way of solving this problem.

The implications of the P vs. NP challenge are enormous. An obvious implication lies within computer science; the difficulty of factoring large numbers is the basis of virtually all e-commerce, and is built into every major web browser.

In addition, data encryption works with an “encrypt key”; the only feasible way to break encrypted data is to try every possible key, hoping that one will work. For high security encryption, for example 128-bit encryption, that is currently a near-impossible task. If P = NP, though, both of these challenges might well be overcome, making computers and the internet significantly less secure.

“If someone could find a fast way of solving hard problems, it would revolutionize the world,” says Morgan. “If someone could figure out a way to simultaneously try all possible solutions to a question — then it would change absolutely everything. It would allow us to solve the challenge of global warming, improve our predictions of natural phenomena, and make breakthroughs in everything from business operations to traffic flow. Life would never be the same again.”

Deividas Seferis ’09 took Morgan’s class and said, “The real beauty of mathematics is understanding the way the world works, the way people can solve problems that no one has ever seen before.”

Morgan hopes that more people will begin to make this discovery. “Many people think that math is about formulas and tools,” Morgan says. “However, the truth is that mathematics is much closer to art than engineering. The fascinating part comes when you get to think, play, and explore relationships between things.”

A few of the open big questions have been solved in recent years.

The Poincaré Conjecture was successfully solved by Grigori Perelman in a series of papers in 2002-2003, a full century after Henri Poincaré first opened the question. Science magazine recognized Perelman’s proof as the scientific “Breakthrough of the Year,” the first time they had bestowed this honor in the field of mathematics.

Another famous question, Fermat’s Last Theorem, was proved by Andrew Wiles in 1995, after having been open for 357 years. This theorem, now the most famous solved question in mathematics, proves that it is impossible to separate any power higher than the second into two like powers. Literally thousands of incorrect proofs had been submitted before Wiles finally solved it. 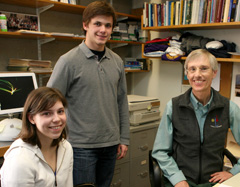 The senior seminar has helped Morgan make breakthroughs, as well.

“In 2007, a student in this class asked me a question during one of our discussions, and I suddenly realized that I knew how to prove something I’d been working on.”

The question was related to the most efficient way to divide three-dimensional space into unit volumes so that the boundaries are as small as possible. That semester, Morgan developed a proof that a solution exists to the question. He published a paper on the proof, “Existence of Least-Perimeter Partitions,” in Philosophical Magazine Letters, a renowned peer-reviewed scientific journal. In the paper, Morgan acknowledged the students from the seminar that had inspired his proof.

For Seferis, it is discoveries like that — finding the answers to problems that no one has ever before solved — that makes math so exciting. “The ethos of mathematics, the really interesting part,” says Seferis, “is the creativity, the way you face problems when the solutions don’t come easily. You have to do the difficult work of the equations. But behind all of that, behind everything you do, there is the simple story of you.”

In this way, Morgan agrees, math’s biggest questions — the questions that confound even mathematicians — “are just like life itself.”