For the last six months, Zoë Samels has been looking at insects. She’s not an entomologist or a science major, but a second year graduate student in the history of art. Samels is this year’s Judith M. Lenett Fellow, chosen from among her classmates to work with the Williamstown Art Conservation Center (WACC) staff to conserve a work of American art.

Samels is stabilizing John Hampson’s General Slocum (1904), an artwork created from 9,751 insect specimens caught by the artist. The work depicts the memorial statue of a Civil War general and is one of nine American History themed collages Hampson made out of beetles, moths, and butterflies. These artworks are part of the natural history collection of the Fairbanks Museum & Planetarium in St. Johnsbury, Vermont.

Over time these artworks have deteriorated, in part due to aging and a previous insect infestation. After all the collages were examined, it was determined that the work depicting General Slocum was in the most need of repair. “The majority of my hands-on tasks have involved cleaning and stabilizing General Slocum’s most fragile areas,” explains Samels.

Hélène Gillette-Woodard, an objects conservator at WACC, and Samels have had to quickly become amateur entomologists. Not your typical artist’s medium, Gillette-Woodard and Samels learned that the colors in butterfly wings are created from light being refracted off a 3-dimensional shaped scale that makes up  the color layer on the wings.

“We’ve been reading a lot of entomology books,” says Gillette-Woodard, “to learn how to properly protect the piece.” Samels adds, “I had to learn how to pin down a butterfly specimen and the morphology of beetles.”

“Our goal,” says Gillette-Woodard, “is primarily to protect the work of art from further damage and preserve what is an ephemeral material. During this art conservation treatment, we have made sure that we use materials that do not negatively interact with the artwork.” 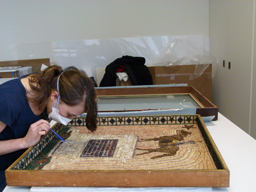 The opportunity to spend the year with Hampson’s insects, Samels says, “has given me the opportunity to take a work that touches on many of my scholarly interests and explore it from an entirely new perspective—that of the conservator. General Slocum was an exciting project to undertake not only because of the strangeness of the work itself, but also the impact it will have on my future study of art history.”
The Judith M. Lenett Memorial Fund was established by the family and friends of the late Ms. Lenett, a candidate for the M.A. degree, Class of 1983, to provide lectures and seminars in American art and its conservation. The Fellowship is jointly administered by the Williams College Graduate Program in the History of Art, the Clark, and the Williamstown Art Conservation Center.