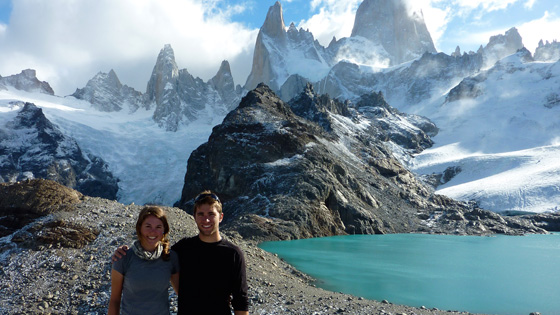 Three months, nine days, and 5,000 km was all it took for Alex Bain ’11 and Sarah Tory ’11 to bike from the north of Argentina to Ushuaia, the southernmost city in the world. And where in the world did they get the idea? According to their blog:

“The idea for our trip to Patagonia started one fateful night of Williams Bowling Club, when Sarah mentioned her desire to bike through South America.  This was a reasonable goal for her–she had already biked across the U.S. and liked to do strange things like run (quickly) for pleasure. Her only difficulty was finding someone with a sense of adventure and a willingness to sleep outside.

“Alex thought biking across Patagonia sounded like a good  idea. This was a slightly unreasonable goal for him–he did not even own a bicycle, and since “retiring” from football sophomore year to go read books in England, he had discovered that sustained exercise is an un-admirable excess of the young and foolish.  But he didn’t want life to turn into this, and, er, the mountains beckoned…”

Having checked off this bucket-list item, Bain will complete pre-med requirements at Bryn Mawr and Tory will begin Columbia University’s writing MFA program.

Read more about their journey and view the route map.

A Season of Learning
Pinning Down History