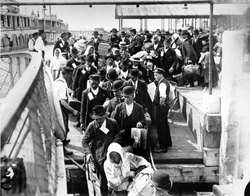 As it plays out on cable television news shows and newspaper opinion pages, the question of immigration can seem like an enormous problem that appeared overnight from nowhere. Among the things Williams College Professor Scott Wong wants his students to understand is that there is much more to the conversation, and that it is has long been intricately woven into any discussion of what it means to be American.

Wong has taught a version of his course Comparative American Immigration History (HIST 380) since he arrived at Williams in 1991. And he says what’s been most interesting through the years is how little has changed.

“These are the same debates that have been going on since the beginning,” he says.

The course is part overview of immigration history, examination of the evolution of policy, and consideration of what it means to be American. It “examines the underlying tension between the notion of American pluralism and the desire for homogeneity” as traced through immigration from around the world, looking at how it shaped labor markets, and the way it frequently stirs up a backlash among the native born.

A major part of the course is filling in what students don’t know. “Most students come knowing nothing about immigration law,” Wong says as an example, and are surprised that there were racial limits on newcomers in place until the 1960s.

During a recent class, Wong guides the conversation to focus on the present debate, beginning with what precisely should be done with the estimated 12 million undocumented immigrants currently in the U.S.

Should there be an amnesty? 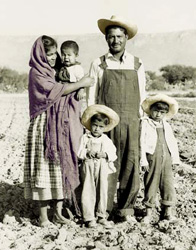 After the 23 students in class work out a list of unsatisfactory solutions, the conversation turns to the naturalization process. Professor Wong passes out copies of the citizenship test. First, he hands out the version of the test used until a few years ago. It is a straightforward case of question and answer (“What color are the stars on our flag?”). He then passes out the most recent, modified version, which includes questions with multiple possible answers (“Name one state that borders Canada?”).

The students quickly begin to question what they need to know, how many Native American citizens could answer correctly, and what steps are in place to ensure the test is fair.

“Some students shared stories about various family members’ experiences with the test,” Quinn Brueggeman ’10, says. “We heard a lot of perspectives and opinions on the conditions of citizenship and a commentary on the process of naturalization that all sprang from looking at the test.”

Wong says he likes to change the texts from semester to semester, though he tries to keep a few texts about the policy matters. He also likes to focus on the experience of specific groups and the challenges they faced, like the experience of Jewish immigrants from Europe in New York, the Japanese-American internment during the Second World War. He also likes to incorporate fiction. This year, he is ending the course with a Jhumpa Lahiri novel.

Laura Huang ’1, said the readings opened a new window on her own experience of coming from a family of immigrants. She said she was particularly struck by one reading, about West Indian immigrants and their relationship with Americans and other minorities which reflects the benefits and limits of assimilation and retaining one’s ethnic background.

“I’ve found myself relating certain passages with my own experiences growing up — my relationship with my parents, with our Chinese heritage, with American society,” she says.

The final project for the course was a 15- to 20-page oral history project, based on the experience of someone in their own family arriving in the United States.

Brueggeman said that she found it “particularly interesting” because it involved looking closely at a subject that was central to her own identity “but that I might not have otherwise investigated.”

The assignments include six one-page reading response papers due throughout the semester, plus two five- to seven-page essays. The final project is a personal or family immigration history of 15-20 pages, due at the end of the semester.

On the Trail to Art
Students Explore Math’s Mysteries