A Human Library is just that—a library where the “books” are living people who volunteer to share their stories with “readers”—members of the community. At Williams on Feb. 10 and 11, more than 240 readers participated in the first-ever Human Library in Massachusetts. The goal was for members of the community—both on campus and off—to learn more about each other, to explore and move beyond stereotypes, and to develop a greater understanding of each other’s unique story. 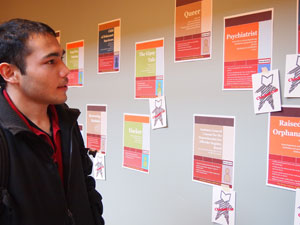 Structured to mimic real library browsing, participants would search the card catalog, apply for a library card, and then check out one of the 35 books as they became available. The book titles, chosen by the “books” themselves, included “Custodian,” “Evangelical Christian,” “Fat Woman,” “Feminist,” “Iraq War Veteran,” “LDS Missionaries (Mormon),” “Olympic Athlete,” “Orphanage Boy,” “Psychiatrist,” and “Queer,” among others. Readers and books engaged in one-on-one conversations that lasted 30 minutes.

Helena Warburg, head of the Science Library at Williams, participated as a book titled, “Child of Holocaust Survivors.” Warburg said that she wanted to participate because as a librarian, “I love the message you get from a book. So the opportunity to be a human book instead of a written book was intriguing.” The experience was extremely intense for her. She was excited to be able to share something personal about herself, so that people could get a better idea of her identity, but she was surprised to learn the extent to which stereotypes persist. She adds that each reader was varied and, “not once did someone ask the same question.” 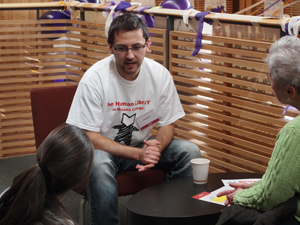 English and American studies major Lauren Shuffleton ’12, who participated with her friend, sociology major and fellow senior Evalynn M. Rosado, also found the experience deeply moving. Lauren, who shares her experience here, says “a half an hour is not nearly long enough to get into challenging conversations. But I think this was the lesson the Human Library gave me: the recognition that I have a stock of friends at Williams and in the Berkshires who have backgrounds different from mine, and that this is the time to get to those difficult, massively important discussions.”

Support for the Human Library at Williams was provided by the Gaudino Fund and the Williams College Libraries.

The Human Library was founded in 2001 in Denmark to promote human rights and social cohesion. To learn more about the Human Library, visit www.humanlibrary.org