The Art of The Hobbit 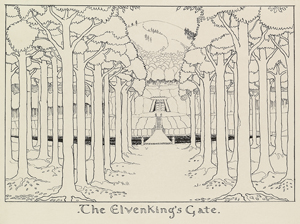 To mark the 75th anniversary of The Hobbit, J.R.R. Tolkien’s popular story for children and the “prequel” to The Lord of the Rings, Assistant Chapin Librarian Wayne Hammond and his wife, Christina Scull, two of the world’s leading experts on Tolkien, were asked to prepare a book collecting all of the author’s paintings and drawings for The Hobbit, from rough sketches to finished art. The original edition of The Hobbit, published in 1937, was illustrated by Tolkien in black and white. Later printings also included watercolor art by the author.

“Our British publisher approached us about writing the new book in late January last year,” Hammond explains, “and asked that we finish by early June, less than five months later. No pressure! They figured that we could make short work of it, since we had already written about Tolkien’s art in our earlier book, J.R.R. Tolkien: Artist and Illustrator.” Besides writing an introduction and explanatory notes, Hammond and Scull laid out the art and helped to create the book’s graphic design. 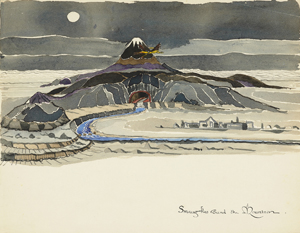 In The Art of The Hobbit by J.R.R. Tolkien, Hammond and Scull present more than 100 pictures made by Tolkien to illustrate The Hobbit or which served as models or inspiration for his art. “More than two dozen of these pictures were not previously published,” Scull noted, “and many had never before been printed in color. Our new book allowed us to include more than we could fit in Artist and Illustrator, and to present some new ideas. It also gave us the opportunity to put Tolkien’s distinctive personal visions for The Hobbit before a wide public before film adaptations start to come along later this year.”

The British edition of The Art of The Hobbit was published by Harper Collins in October last year. The American edition is now available from Houghton Mifflin Harcourt.

The Elvenking’s Gate and the Hobbit dust-jacket art (c) The J.R.R. Tolkien Copyright Trust. Smaug Flies Round the Mountain (c) The Tolkien Trust.

Mountain Day!
A View from the Floor