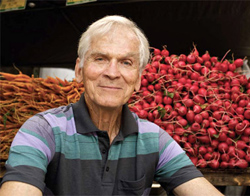 In 1976, words like local, seasonal and organic weren’t exactly front of mind for grocery shoppers. In urban areas and New York City, in particular, where food was shipped, flown and trucked in by necessity, what passed for a tomato was frequently flavorless and mealy. Peaches were small, hard and pea-colored. So when the first Greenmarket opened in a police parking lot at East 59th Street and Second Avenue, just a block away from Bloomingdale’s, it was a bit of a revelation for city dwellers — at least for those who had never tasted a fully ripened peach in season.

Today farmers’ markets are far more common, especially as consumers have become more culinarily sophisticated and environmentally aware. But when Barry Benepe ’50 launched that first Greenmarket, it was a tough sell. All around the New York metropolitan area, farms were failing and formerly verdant fields being converted into suburban cul-de-sacs, while city dwellers were being fed a steady diet of imported produce. As a planning consultant working on farmland preservation and open-space protection in the Hudson River Valley, Benepe began thinking about the symbiotic relationship that could be had between city and country — how the marriage of the two made sense both economically and ecologically.

He regularly spoke with Bob Lewis, a colleague who was working on a plan for Woodstock, N.Y., about how to stem the tide of farmland depletion. “We began kicking around this idea of farmers and food,” Benepe says. “We thought it might be one way to address the issue of the loss of farmland.”

The problem was that the city never saw itself as a critical marketplace for regional farm products. With no immediate political or popular support for their idea, the two men obtained an $800 grant from the America the Beautiful Fund to do a feasibility study for a farmers’ market. They eventually got the go-ahead from the office of then Mayor Abraham D. Beame.

The police gave over that tiny parking lot on the Upper East Side every Saturday starting in July 1976. The following month a second location opened at Union Square. Today the Greenmarket, still under the purview of the mayor’s office, operates 46 locations throughout the five boroughs — 17 of which are open year-round. During the high season, more than a half million shoppers every week browse stands brimming with locally raised fruits, vegetables, eggs and meat. All told, an estimated 30,000 acres of farmland have been preserved as a result of Benepe and Lewis’ initial efforts.

Although he retired from the Greenmarket in 1998, Benepe is a regular and frequent visitor, especially to Abingdon Square, the location nearest his home in Manhattan’s West Village. Sitting at the kitchen table in his fourth-floor walk-up on a bracingly cold January morning, he pulls out a recent purchase: a large, green stalk packed tight with Brussels sprouts. Even in winter one can find a veritable bounty at the city Greenmarkets — honey, maple syrup, meats, baked goods.

Benepe grew up near Gramercy Park on Manhattan’s East Side, though he wasn’t exclusively a child of the city. His family owned a farm in Maryland, and by age 16 he was driving crops to market during school vacations. When he arrived at Williams, Benepe thought he’d study economics. But he was so inspired by legendary art history professor S. Lane Faison ’29 that he switched his major to art. After graduation, feeling a pull toward architecture, he pursued graduate study at M.I.T. There he worked closely with noted urban planner and author Kevin A. Lynch. It was that experience, Benepe says, that edged him toward urban planning and helped him develop “a consciousness of looking at space.”

Never entirely comfortable as a draftsman, Benepe landed at a Manhattan-based planning firm where he worked on open-space protection and farmland preservation projects that first got him thinking about the Greenmarket. Looking back at the early days of the market, he recalls it was equally difficult to persuade farmers that the effort would be worthwhile as it was to convince city officials. When his partner Lewis approached growers in southern New Jersey, they balked. “They thought they’d take full trucks into the city only to return home with empty pockets,” Benepe says.

Educating consumers about the advantages of seasonal produce also proved a challenge. “People used to love coming when the market opened in May, but they were looking for oranges when there really wasn’t anything except lettuce,” Benepe says. “People didn’t understand seasonality.” Part of Benepe’s legacy is that people have come to appreciate a regional, sustainable food system and its positive impact on the environment. They also better understand its connection with health and wellness, says Michael Hurwitz, the Greenmarket’s current director. “Barry is still seen as a pioneer, and his ideas and commitment are as important today as they were 32 years ago,” Hurwitz says.

Hurwitz says he occasionally consults Benepe on issues related to the Greenmarket, but the way Benepe tells it, “I stick my nose in from time to time.”

As for the future of the Greenmarket, Benepe says he’d love to see some of the current marketplaces become dedicated pedestrian environments, “so when the market is not there, it’s an inviting public place.” Currently, Union Square is the only site with that setup, though Times Square, Cooper Square and Madison Square all could be redesigned to be more friendly to the public. “The future of the market is connected with urban space,” he says. “We need kinder urban spaces.” 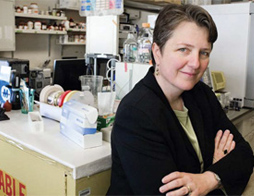 Kathleen Merrigan ’82 was the lead Congressional staff author of the 1990 Organic Food Production Act, which directed the U.S. Department of Agriculture to develop standards for certifying organic foods. Later she rallied critics when the USDA initially proposed weak guidelines for its organic seal of approval. From 1999 to 2000 she headed USDA’s Agricultural Marketing Service and oversaw publication of a final organic rule. Now an assistant professor at Tufts University’s Friedman School of Nutrition Science and Policy, she’s still stirring the pot. Here she shares her thoughts about rooftop gardens, eating local and bitter melon.

Organics are the fastest-growing segment of the food and beverage market. Would you have predicted that in 1990?

We didn’t expect the law to be so successful. Organic production was heresy to mainstream agriculture. It challenged conventional thinking, and a lot of farmers and ranchers saw it as an implicit criticism of their methods, even though we were careful not to knock other production systems. And a lot of early organic prophets were counter-culture types who lived alternative lifestyles. But we worked hard to get grassroots support from farmers, and environmentalists joined in because the bill addressed issues like water quality and pesticide use. So it passed much faster than we expected, which is one reason why it took 12 years to finalize standards. We barely had time to catch our breath before we started debating the details.

Can the industry get much bigger?

It’s still a baby compared to mainstream agriculture. Organic production gets a lot of press for its size, but less than 1 percent of agricultural land in the U.S. and less than 2 percent in Europe are farmed organically. Right now organic farming is getting beaten up because people are looking at issues like food miles [the environmental impact of shipping food from farm to market]. It’s true that some organic products travel a long way, but it’s still a small industry, and that will change as production expands.

Organic agriculture is better for soil than chemical-intensive farming, but are organic foods actually more nutritious than conventional products?

This is a pretty new research area, but several studies (including one of mine) have shown that organics contain higher levels of beneficial plant chemicals like polyphenols and other antioxidants than conventional products. There’s also some evidence that organics are more nutrient-dense.

We need more work on these issues, but we know some important things now. First, organic foods are raised without synthetic pesticides, which are a health problem. The Environmental Protection Agency’s limits on pesticide residues in food often are violated and aren’t strict enough in any case. Second, organic production doesn’t use antibiotics or hormones. And third, organic agriculture is the only production system that has rules for using manure as fertilizer. Farmers have to wait for specified time periods before they harvest so that food won’t transmit infectious agents like E. coli 0157:H7.

How much organic food does your family eat?

We don’t buy 100 percent organic because sometimes the cost is just absurd. There are a lot of middlemen in the process, and farmers get a very small share of retail prices, so I don’t see any point in paying ridiculous markups.

They can be, although some arguments you hear about eating locally aren’t very well thought out. Some people say it’s more sustainable than buying organic, but if everyone gets into their car and drives 20 miles to a farmers’ market, the impacts add up.

What other issues are you researching? 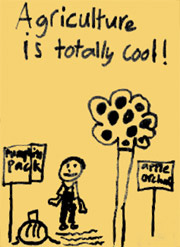 I’m very interested in all kinds of urban agriculture, from rooftop gardens to school gardening programs. My program at Tufts has a garden-based learning project at a Boston school where 80 percent of students are from families below the poverty line. We’re studying whether teaching through gardening actually raises kids’ scientific literacy and encourages them to eat more fruits and vegetables. Tufts also runs a program called the New Entry Sustainable Farming Project, which helps immigrant farmers get started in Massachusetts. Many of them are from Asia and Africa, and they raise their own traditional crops. When I visit our farmers’ markets to support our trainees, I always come home with tons of produce. It’s great, although I’m still trying to figure out what to do with bitter melon.