Every year, costume designer Deborah Brothers is asked to provide attire for someone dressing up as Col. Ephraim Williams Jr. (1715-1755), the namesake of Williams College and Williamstown. Hopefully the next time the call comes, whether to commemorate his March 7 birthday or for the annual holiday walk in town, the colonel will have an authentic period coat, thanks to the ongoing research of Brothers and classics major Mattie Mitchell ’12.

In the past, the Ephraim Williams costume would be pulled from the department’s stock–pieces that Brothers had previously made or worked with students to create for theater department productions such as Moliere’s Tartuffe. A few years ago Brothers heard about a jacket given to the College Archives in 1911 that supposedly belonged to Ephraim Williams’ brother, Thomas. The garment was far too fragile and small to be worn, but the deep red broadcloth was in remarkably good shape for its age. Little else was known about it. 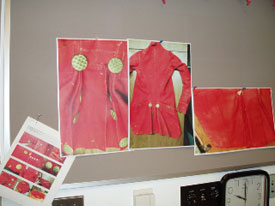 It wasn’t until Mitchell approached Brothers last summer about a research project that the two were able to take a closer look at the jacket. As a Class of ’57 Summer Research Fellow, Mitchell, who has always loved to sew, spent 10 weeks working with Brothers to meticulously research and draft a pattern based on the garment.

First Brothers and Mitchell looked into what Ephraim Williams might have worn at the Bloody Morning Scout when he was killed in 1755 near Lake George in New York. They conferred with other 18th century historians and compared the college’s jacket with pieces in the collections at Fort Ticonderoga and at Historic Deerfield. They looked at details such as the buttons, the cut of the sleeves, and the pockets, which are interesting in that the pocket flaps are stitched facing up—the opposite of most examples seen from that period. 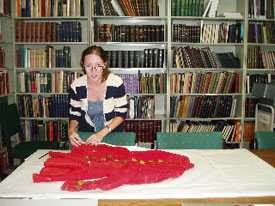 “The opening allows our hand to go directly into the pocket,” Brothers says of the pockets. “Mattie and I began looking for other examples of the pocket flaps being sewn to the pocket.” They did find one example–a Diderot etching that showed a flap sewn at an angle.

All of their research helped them to place the college’s coat squarely in the 1790s – much too late to actually to have belonged to Thomas Williams. They also determined it was more likely a hunting jacket than part of a military uniform. After Mitchell looked into the Williams family tree, it was decided that the jacket most likely belonged to another Thomas Williams–the grandnephew of Ephraim.

As Brothers explains, “A coat from 1755 would have had bigger cuffs. It would have been fuller in the front and in the skirt as well as in the back of the jacket. On this coat, you can look at the cut and the lines, the way the front falls to the back, and the size of the buttons, and tell that it is from a later period.”

Brothers and Mitchell decided to create a pattern based on the coat so that they could make a replica. In doing so, they tried to piece together the history of the red jacket. An article like this is “a wonderful detective story,” says Brothers. “We came up with various stories of the coat: Was it cut down from an earlier period jacket? Or were the various insets showing us the tailor’s frugal cutting of a limited amount of cloth? We had a garment that we kept coming back to, looking at the artifact and letting it tell its story rather than our story.” 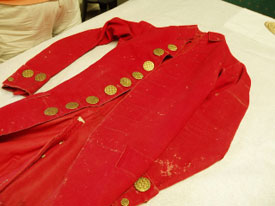 The replica coat and its corresponding pattern will eventually be housed in the college’s Archives & Special Collections and shared with a larger community of people who may be interested in clothing of the era. In the meantime, there is still research to be completed to accurately “dress” Col. Ephraim Williams.

“For Ephraim’s new set of clothes,” explains Brothers, “the plan now is to apply what we can learn from the inventories of what Ephraim had in his chest of clothes at the Bloody Morning Scout and the inventory of personal property of what he had in his will.”

“It’s such a great feeling to combine research and interests from American and European history, theater, art, and Williams history,” says Mitchell. “This is truly what the liberal arts is about, proving that any one project can be explored from so many angles for so many people. I would love to do this kind of research for museums in the future, so that we can preserve the history of these garments as well as the artistry that created them.”

See more coverage of the red jacket in the January 2012 Williams Alumni Review.

Getting It Wrong
One More Huddle