Last year, the Art Department revised the core-requirements for art history majors to acknowledge the historical importance of art outside the European and American context.  Along with Aspects of Western Art, students can also opt to take a survey of Asian Art. The course, taught by professor Ju-Yu Scarlett Jang, delves into the varied arts of painting, sculpture, architecture, ceramics, and decorative arts of India, China, Central Asia, and Japan. The inclusion of this class in the core-requirements brings the art history major in line with the college’s mission to shape its students into world citizens and reflects the global scope of the art and art history disciplines today. 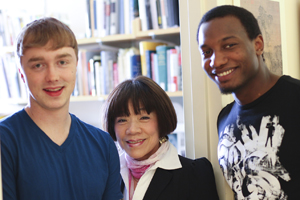 Junior Emmanuel J. Whyte, a psychology and studio art double major, took the Asian Art class last semester. Although he has always been very interested in Asian history, this course really made the artwork come alive for him. “Professor Jang teaches with unwavering enthusiasm,” he said. “She has us analyze the artworks formally and then we use religious, political, social, and philosophical analysis to learn more about the works.”

When asked for an example, he explained, “We learned how Indian people have been very spiritual since the Vedic period, around the third millennium B.C.E. We then looked at how this spirituality influenced the rise of religions and philosophies such as Hinduism, Buddhism, and Jainism. The most marvelous thing about early Indian art is how these religious and philosophical ideologies were inseparable from paintings, sculptures, and even nature, as monumental sanctuaries were carved into entire mountainsides as evident in the Ajanta Cave sites.”

Junior Roshan Sharma, a physics and mathematics double major, also took the class and called the experience “fantastic” and “an eye opener.”

“Although I am from Nepal,” she said,  “I had no idea of the art history of the adjacent countries (India and China), so this class has filled in the gaps.”

Art major Tucker Bair, a sophomore, thinks the course should be a requirement for art history majors. He says, “The ability to put everything into context is invaluable. The people of India, China, and Japan approach art with a totally different attitude than those of Europe and the United States. A landscape from the Chinese Northern Sung dynasty (960-1127) is certainly beautiful, but beyond that it may appear inaccessible to the Western viewer. Once you have the knowledge and background of Confucian, Buddhist, and Daoist principles, the culture and political climate of the dynasty, and the aims and ideals of the artist, it becomes not a simple wall hanging but a portal into nirvana; viewing the work of art suddenly becomes a profound experience that takes you out of this world and puts you into an entirely different one.”