A Muslim for All Williams Seasons

Williams’ first Muslim chaplain and associate coordinator of community engagement arrived on campus on August 28, 2011. By August 31 he was hosting a feast for Muslim students to celebrate the end of Ramadan and helping lead Williamstown efforts to support residents flooded out of The Spruces mobile home park by Hurricane Irene.

Here’s what he has to say about his life-to-date and new job: 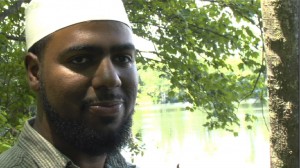 How did you come to Islam?

My father got there first; he founded San Francisco’s first mosque. My mother’s an evangelist minister who serves in prisons throughout Connecticut; her own parents led a Pentecostal church in New Haven. So I grew up with both black American religious paradigms:  Martin Luther King, Jr. and Malcolm X. Ultimately, my heart and mind found their home in my paternal religious roots.

What were you doing before you came to Williams?

Organizing Connecticut grassroots movements in affordable housing, labor, community empowerment, economic development, and universal healthcare. I also founded the Muslim Chaplains Association, a resource for chaplains of all faiths who address the needs of Muslims in their institutions. That’s meant organizing national conferences, writing peer-reviewed journal articles, and lecturing on Muslim chaplaincy throughout America and in Europe, Asia, and the Middle East.

How do the two halves of your Williams job intersect?

If someone reduced my life’s work to a few meaningful words, they would read: “Muslim Chaplain and Associate Coordinator of Community Engagement.” It’s amazing how exactly these two seemingly unrelated roles—one sacred, the other secular—come together in one Williams job. When I applied for it, I looked for an intersection of these roles in the college’s mission and purpose and found it here: “We place great emphasis on the learning that takes place in the creation of a functioning community: life in the residence halls, expression through the arts, debates on political issues, leadership in campus governance, exploration of personal identity, pursuit of spiritual and religious impulses, the challenge of athletics, and direct engagement with human needs, nearby and far away.”

What are your Williams aspirations?

I aspire to enact Williams’ ideals as Muslim chaplain by focusing primarily on students’ exploration of personal identity and the pursuit of spiritual and religious impulses. My aspirations for community engagement, again, are rooted in the development of a healthy community that organizes resident halls from separated neighbors and distant “hoods” to directly engaged neighborhoods. These aspirations are inseparable within me personally: I wish every student at Williams, religious or not, learn how to meet unmet human needs, nearby and far away.
________________

View a PBS video of Bilal’s former prison ministry here and his seminal “sermon to the cheese fries” here.