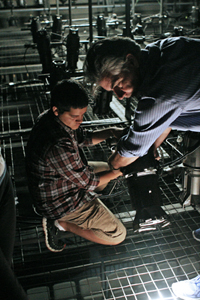 High above the CenterStage, in the lighting grid, nine students are on the job, focusing lights and learning the basics of stage lighting at the ’62 Center for Theatre and Dance. It is their first day working at Williams’ Summer Theatre Lab and they are being instructed by award-winning theatre professional Kevin O’Rourke, the organization’s founder and a member of the Class of ’78. In its eighth season,  “the Lab” places students, professional actors, writers, and directors—most of them Williams alumni—together to work collaboratively in a supportive theatre environment.

Experimentation, collaboration, and hands-on experience are at the heart of the Lab. It is a place where new ideas can be tested, specific parts of a story can be fleshed out, or dance and musical elements can be composed. Structured in the Lab are critical feedback sessions and a camaraderie that allows for the free flow of ideas among participants. Over seven intense weeks, students learn aspects of the theatre profession as they become both the company and the crew for all of the pieces on which they work. Each week brings a new performance to the CenterStage, culminating in a three day event where works from the Lab are performed in repertory.

The draw for students is clear: many are theatre majors hoping to pursue a professional career in theatre after graduation. Students benefit not only from the in-depth training they receive but also get to experiment with different aspects of the theatre, from playwriting and clowning to lighting and mask-making. With such diverse exposure, a student might go into the Lab seeing herself as an actress, but find her true passion elsewhere. This was the case for Anna Barnes ’14. 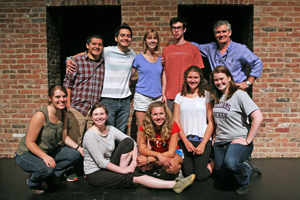 “Last  year,” she explains, “there was a brief moment when the group needed an organizer. I am compulsively punctual and Type-A, so the role naturally fell to me. I discovered that stage management allowed me to blend my organizational skills with the creativity that made me love performing.” Barnes is now in her second summer at the Lab, working as the company’s stage manager.

For alumni, too, the Lab has much to offer. David Evans Morris, a graduate from the Class of ’96 and an assistant professor of theatre at Williams, is working on his play Trade Practices over two weeks at the Lab. A very early experimentation with the ideas in the show—Trade Practices examines the idea of value by dropping the audience into a living market, allowing their participation to drive the cost of each of the six episodes—debuted at the Lab in 2009. His goal is to have one of the episodes solidly drafted by the end of his Lab residency. “This kind of opportunity is invaluable,” he says of working with the Lab. “It truly allows the greatest creativity and most productive collaborative process imaginable.”

For more about the Lab, read the Alumni Review’s January 2006 article Play.

A historic Olympic swim for Faye Sultan ’16
Bicentennial Medalists to be Conferred at Convocation, Sept. 8