Exploring the Past to Understand the Present

Students in Dorothy Wang’s Theories & Methods in American Studies class spent the fall applying what they’d learned about conducting research to the very institution they call home. Using the Williams College archives, each student dug into one aspect of the college’s past and wrote a research paper about what he or she found.

“I want students to see their education as something they have control over,” said Wang, an associate professor of American studies, who wa 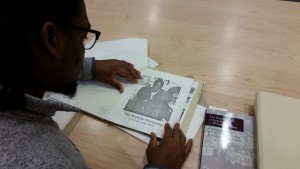 s teaching the upper-level seminar—a requirement for American Studies majors—for the first time. “These projects help them take responsibility for their education and give them a chance to get to know the archives.”

Students researched topics such as the college’s role in the development of the Hoosac Tunnel and its stance on slavery leading up to the Civil War. The first step for each of them was a meeting with college archivist Katie Nash. “My role was to find out what we have and pull those materials out,” said Nash. “Often, one item would prompt a student to ask a different question, which prompted me to find a different resource. Archival work is ever-evolving, and the students found they could follow a trail to unexpected places.”

That was the case for Cinnamon Williams ’16, who researched something that happened in the college’s very recent history—her freshman year. “I investigated the disappearance of the Women of Color Resource Center and asked why it was absorbed into the broader Feminist Collective in the spring of 2013,” she said.

She found the archives didn’t have very much material about her project. “But there were clues!” she said. Following them took her back further in time, to learn about how the Black Student Union became inclusive of women in the 1980s and to documentation of the founding in 1990 of Williams’ first organized group for women of color. 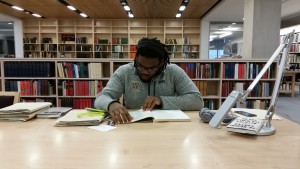 Then, over Thanksgiving break, she spoke with an alumna involved in the Women of Color Resource Center. “I learned its formation was an effort to provide black and Latina women with a space to articulate their experiences of hostility on this campus,” said Williams. “She shared narratives that are hard to find in the archives. It’s important to hold those close in our institutional memory.”

Caroline White-Nockleby ’17 researched the movement on campus for divestment from companies doing business in South Africa during apartheid—an issue for which she found plenty of material in the archives. “Katie brought me boxes filled with manila folders,” White-Nockleby said. “Each was filled with local newspaper articles, articles from The Record, annual reports, faculty notes. These pieces tell an incredible story.”

Nash said she hopes more classes will take advantage of the resources in the archives. “It’s exciting to expose students to primary sources and see their minds working and their scholarly world opening,” she said. “The students teach us about our collections, too, since they interact so intimately with the resources.”

The Joys of Teaching and Learning: Peter Thorp ’70
Arizona 5th-Graders Get a Peek at College Life from Williams