Note: Jeffrey Rubel ’17 and his team of Mount Greylock students came in fourth place statewide in their first-ever appearance at Envirothon.

On May 12, a group of local high school students will compete in a statewide environmental science competition called Envirothon. The event—which takes place at Hopkinton State Park in eastern Massachusetts—brings teams from across the state to an outdoor, hands-on competition. Winning teams from each state will compete in Ontario in July at the North American Envirothon.

Williams geosciences major Jeffrey Rubel ’17 organized the team through his work at the Williams Center at Mount Greylock. He’s coached the group since November, designing lesson plans, organizing field trips, and preparing hands-on activities. “I assigned each member of the team an area of expertise from the four main topics tested during Envirothon,” he says. “Every week, one of the students gives a presentation on their topic.”

The team—eight high school sophomores, juniors, and seniors—meets every Sunday afternoon. Some weeks they spend the session in the classroom giving or listening to presentations on water, soil, forestry, or wildlife. Other times, they’re in the field studying anything from the trees at Hopkins Forest to the health of the stream at the base of Spring Street. “The Envirothon curriculum is built on the intersection of the theoretical and the practical, the textbook learning and the hands-on experience,” Rubel says.

Rubel was part of the team from his high school in Kansas City, Mo. that went to the North American competition all four years he was there. His team won once.

“The fieldwork makes everything we’ve been learning suddenly transform from technical concepts into concrete things we can see in front of us,” says Anya Sheldon, a high school senior and team member. Fieldwork is also important for the competition, which takes place entirely outside. “Students walk around the forest with a clipboard and a test,” Rubel says. “The experience brings environmental science to life.”

Assistant Director of Local High School Education Kaatje White, who directs the Williams Center at Mount Greylock, looks for opportunities to enhance the programming at the junior-senior high school. She knew she’d landed on a perfect plan to do so with environmental science when Rubel told her about his experience and said he’d be willing to coach a team.

“What I like about coaching the Mount Greylock Envirothon team is that I’m not only working with local students, but I’m giving back to a program that gave so much to me,” Rubel says. 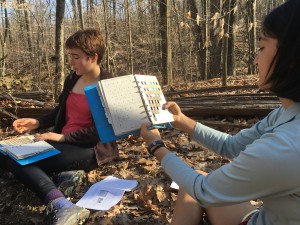 The program hopes to prepare high school students for environmental careers and active citizenship. “These students may or may not major in science in college, but they are very likely to be our future leaders,” says Rubel. “I hope the knowledge and understanding of the world they gain through Envirothon stays with them.”

Sheldon says that’s the main goal. “I don’t think any of us are particularly bent on winning,” she says. “We’re just in this to learn the most we can.”

“Envirothon offers Mount Greylock students a wonderful academic experiential stretch outside the classroom,” says White. “I hope it will become a yearly event and would love to see Williamstown host the Envirothon competition one day.”

Religion and Science
Linking Faith, the Academy, and Activism