Sixty-five alumni and nearly 30 members of the Davis family came to Williams on October 19 and 20 to celebrate the rededication of the Multicultural Center as the Davis Center. Founded in 1989 in response to student protests, the MCC has long supported underrepresented students at Williams. Twenty-three years later, the population of the college is extremely diverse, the curriculum has evolved to include courses, programs, and departments those protestors from the 80s could only dream about.

Today, then, said Davis Center director Lili Rodriguez, “We are faced with a new question: How do we engage all of our citizens?” The center’s new name signals a new mission focused on three pillars: to educate, to support, and to lead.

The weekend’s events kicked off with the annual Davis Lecture, this year given by Danielle Allen, the UPS Foundation Professor at the Institute for Advanced Study in Princeton, N.J. Allen’s talk, on Education and Equality, focused on a close reading of the Declaration of Independence, and was followed by a concert by the celebrated Los Angeles culture-mashers Ozomatli in the Lasell Gym.

On Saturday morning, a series of panel discussions and workshops began with the Davis Center staff reflecting on the history of the center and their vision for the future. To an audience of more than 50 alumni, faculty, and staff, Rodriguez explained that the center was rededicated to honor W. Allison Davis ’24 and John A. Davis ’33 because they “serve as our legacy, as our reminder, and as our benchmark.”

W. Allison Davis graduated summa cum laude and as valedictorian from Williams in 1933. After studying English at Williams and earning a master’s degree from Harvard, Davis was denied a junior faculty position at the college, a rejection he attributed to racial politics and for which he bore a nearly lifelong resentment. Turning his anger into action, Davis changed fields, studying social anthropology and psychology. He earned his Ph.D. from the University of Chicago in 1942, and went on to influence policy on low-income children’s access to education, teach in the University of Chicago’s department of education, and publish several important works in the field, including Children of Bondage: The Personality Development of Negro Youth in the Urban South (1940) and Deep South: A Social Anthropological Study of Caste and Class (1941). 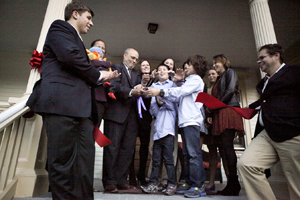 Rodriguez described the mission of the Davis Center as reflecting the vision of these two men. The center’s aim is “to give students the skill set to inspire them and help them build community,” adding that, “to transform the college culture, we need to be a resource for all students.” Therefore, while the Davis Center will continue to serve as a support network for historically underrepresented students, Rodriguez explained that, “one of the ways we do that is to bring it to the entire community.”

Calling this a paradigm shift—because the MCC has historically been considered a place for students of color—Rodriguez hopes it will be transformative.

Another change is in the curriculum: “We need to teach students that they don’t have to make the choice between scholarship and activism,” Rodriguez explained. To that end, the Davis Center will partner with an academic program or department each year to host a research conference, and Rodriguez and Assistant Director Taj Smith will teach a course each spring.

As German professor Gail Newman, faculty fellow to the Davis Center, explained, “We have to learn deeply about others and think critically about ourselves.”

Michael Reed ’75, vice president for strategic planning and institutional diversity, led a discussion about first-generation college students at Williams, and strategies he has identified they use to navigate their experience in college. Conference attendees then split up to attend various panel discussions about leadership, education, and activism. Bilal Ansari, the Muslin Chaplain at Williams and the associate director of community engagement, spoke about activism on a panel Saturday afternoon, asserting that, “one’s individual passion, when joined with collective compassion, can join together to create change.”

More than 100 students, faculty, staff, and community members attended the ribbon cutting ceremony Saturday evening, where President Adam Falk expressed his gratitude to the Davis family. He said that Williams has “grown a lot in 100 years, but we have enormous work to do.” Some of that work involves the college’s “opportunity to be intentional about its community,” he said, asking: “What is Williams? Who will we be together? How will we be with each other? That is what the Davis Center is here to help us do.”

Asking the entire Davis family to stand with her on the steps, Rodriguez brought the ceremony to a close, expressing her gratitude to the Davis brothers and their descendants, who “help us carry the burden,” going on to assert that, “we owe it to the next generation to help make their burden a little lighter.” 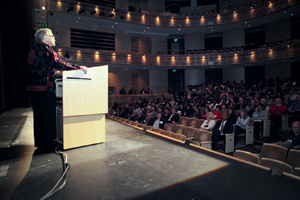 The conference ended Saturday night with more than 250 people attending Johnnetta B. Cole’s keynote address. Cole is the director of the Smithsonian National Museum of African Art, a longtime scholar-activist and public intellectual and former president of both Spelman and Bennett colleges. “The Davis Center doesn’t just do the right work, they do sacred work,” she said. Cole reiterated Rodriguez’s remark about the burden to affect change for the next generation when she said, “We didn’t get promised that it was going to be easy. But what is your alternative to your place in the struggle?”

Cole said she sees that struggle as central to receiving an education. “Excellence in education is only possible if there is diversity,” she said, and excusing her use of slang, went on to add that, “bigotry ain’t in the chromosome; it is learned. And if it is learned, it can be unlearned.” Ending her talk to a standing ovation, Cole said that although we are “still such a mighty long way from the day when no one is judged by the color of their skin, by the shape of their body, by who it is they couple with, by which supernatural force—if any—they worship, by how much money they have, and indeed by whether they are fooling themselves to think they are fully able or admit that they are differently able,” the work of the Davis Center is how we get there.

WCMA at Night
A Choreographic Experiment