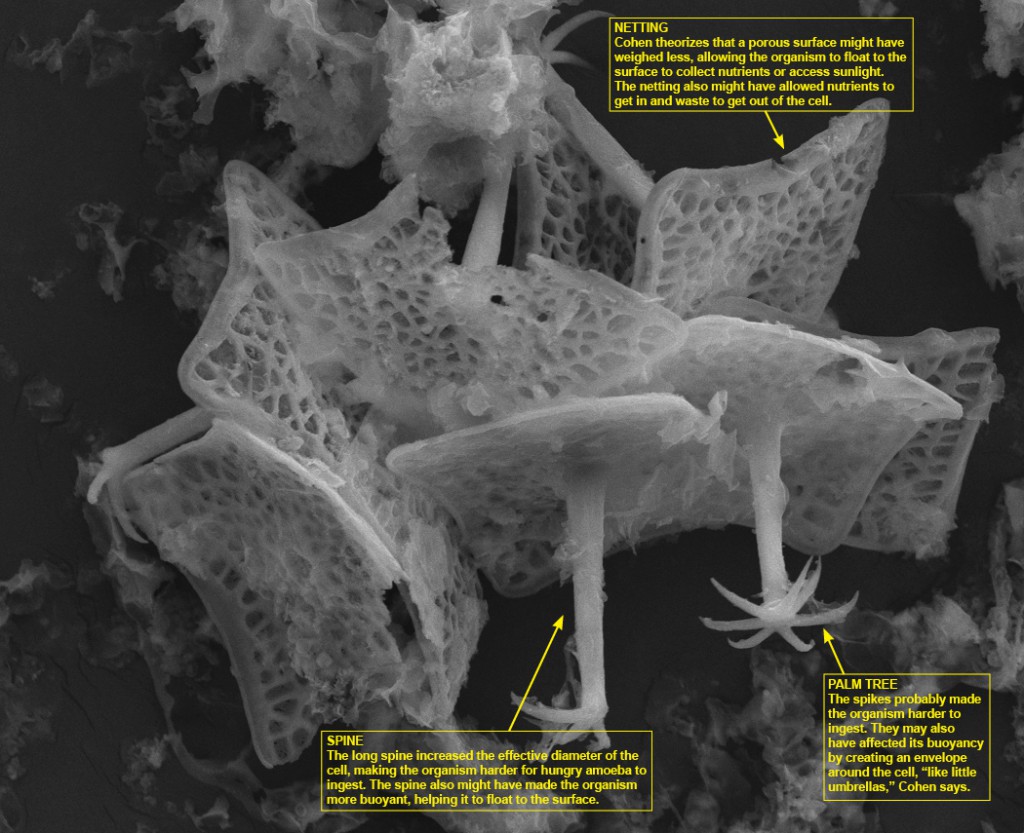 Climate Change on a Geologic Scale

A 750-million-year-old fossil discovered by geoscientist Phoebe Cohen may hold clues to how life has changed the earth—and vice versa.

Following up on work done by scientists in the 1970s, Cohen and a fellow Harvard University graduate school student traveled to the Yukon in 2007 to study rock formations and found a veritable goldmine of fossil-containing rock. Advancements in scientific tools and instruments in the last 40 years allowed Cohen to examine the fossils in a new way, by dissolving the carbonate rock in acetic acid rather than looking at a sliver or cross-section of the rock, as had been done in the past.

“After the carbonate dissolves away, what’s left is organic matter,” says Cohen, now an assistant professor in the Geosciences Department. And what she was able to see in the organic matter amazed her: three-dimensional “bones” of what might be one of the earth’s first eukaryotic single-celled organisms to make hard parts.

Eukaryotic cells have a nucleus and organelles, like animal and plant cells but unlike bacteria cells. The fossil Cohen discovered, which she named Quadrireticulum palmaspinosum (loosely translating to “four-sided net with palm tree spine”), measures about one-tenth the width of a human hair.

As the organisms became buried in sediment, the carbon they contained was locked away with them, reducing the levels of carbon in the ocean and the atmosphere. Over the next 750 million years they developed into the giant rock in the Yukon that Cohen studied. The process may have caused the earth to cool, perhaps eventually contributing to what Cohen and other scientists call “a snowball earth event,” when ice covered the entire planet for millions of years.

With the help of research assistants Nakita VanBiene ’15, who is a geoscienes major, and Kim Kiplagat ’16, Cohen is now studying snowball earth events. She’s in the process of writing a grant proposal to research the time periods before, during, and just after the two major snowball earth events in our planet’s history, which took place 717 million and 635 million years ago, to better understand the relationships between evolutionary events such as biomineralization and events in the earth system such as climate change.

“This work helps us understand how life has evolved through time, in response to both other living things and to the environment,” Cohen says. “We are working toward a better understanding of the dynamics between evolution and changes in the earth’s climate over geologic time scales.”

Click the image above to see a larger version.