Burns and FDR: A Conversation

Williams professor Susan Dunn and presidential historian Michael Beschloss ’77 are paying tribute to the late James MacGregor Burns ’39 and his deep knowledge of the life and presidency of Franklin D. Roosevelt at the FDR Presidential Home and Library in Hyde Park, N.Y.

Burns, Williams’ Woodrow Wilson Professor Emeritus of Government, drew powerful lessons from his extensive study of Roosevelt’s presidency. His two-volume biography of Roosevelt, The Lion and the Fox (Harcourt, Brace, 1956) and The Soldier of Freedom (Harcourt, Brace, Jovanovich, 1970), painted the late president as a political genius who pitted opportunism with occasional deception. The acclaimed study won both the Pulitzer Prize and the National Book Award.

Beschloss, a political science major at Williams, wrote his senior thesis on Roosevelt and Joseph Kennedy under the guidance of Burns. It became his first book, Kennedy and Roosevelt: The Uneasy Alliance (Norton, 1980). Since then, Beschloss has written eight more books, the majority of which explore the art of presidential leadership, and has been a columnist on history for The New York Times since November 2013.

Dunn, the college’s John B. McCoy and John T. McCoy Professor of Humanities, co-authored two books with Burns, including The Three Roosevelts, and has written nine other books herself. Her most recent is 1940: FDR, Willkie, Lindbergh, Hitler—the Election Amid the Storm (Yale University Press, 2013). 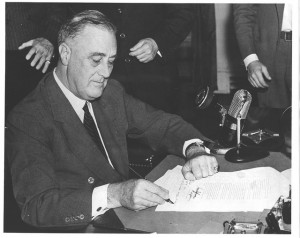 At Hyde Park, Dunn and Beschloss plan to have a conversation about Burns’ remarkable and early scholarship, which includes the interpretation of Roosevelt’s leadership style and lessons drawn from Roosevelt’s marriage of political prowess and moral vision.

The discussion will take place at 1 p.m. Saturday at the Henry A. Wallace Center at the FDR Presidential Library and Home in Hyde Park. For more information about the event, visit the library’s website.

The spring semester is scheduled to begin Feb. 17. See our Covid-19 website for strict health and safety protocols for those who remain on campus. All Williams College buildings are closed to the public and visitors until further notice.