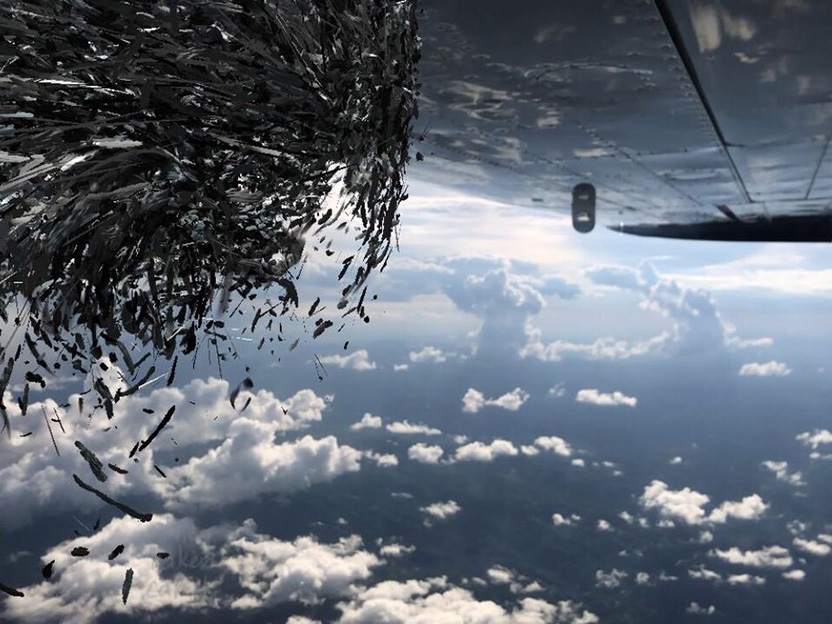 Multidisciplinary artist Nancy Baker Cahill ’92 recently launched an augmented reality (AR) app called 4th Wall that allows users to experience her work anywhere in the world. After downloading her drawings to an iPhone, users can place them as a complement to the scene they’re standing in, walk around inside of the drawings or, in some cases, use them to make a political statement.

“One user took the app to the U.S./Mexico border and placed a drawing on the U.S. side before walking backwards and literally pulling it through the border wall into Mexico,” Baker Cahill says. “The artwork becomes a public collaboration and has even more conceptual potential than what I’d originally envisioned.”

Baker Cahill first heard about AR’s more advanced cousin, virtual reality (VR), in a political theory class at Williams. “We spoke about it as a potential future tool for creating political empathy, for getting people to care about someone else’s plight,” she says.

Theoretically, VR has advanced enough to allow that to happen, if a person has access to the necessary headset and hand-held controllers. VR allows the user to experience not the world they stand in, but the computer-generated simulation of an alternate world. But the political potential Baker Cahill learned about in the early 1990s has largely been supplanted by VR’s more common use today: video games.

Baker Cahill says that when she was a college student she was fascinated by the idea of what VR could do, but she didn’t think about it very much after those class discussions. Although she’d considered double majoring in political science, as a studio art major, she didn’t see an application for the then-nascent technology. Twenty five years later, she does.

All of the drawings available in 4th Wall were first created for a virtual experience, a medium Baker Cahill has been working in for the last few years. “I translated these drawings into AR because it is far more accessible,” she says. “AR doesn’t require any gear, and anyone with an iPhone can download the app for free.” Once downloaded, the user can either walk or “teleport” (if they are unable to move freely) through any of the VR-generated drawings, her L.A. studio or a hologram of her discussing her work.

Making art accessible to all, either through public art or free apps, is one of the through-lines in Baker Cahill’s career. After she graduated from Williams, she got a job in public television as a writer. “I wrote narration describing film and TV for the blind and visually impaired, which heightened my awareness of senses other than sight,” she says. “But more than that, I became aware of how difficult it is for people who were constrained by their circumstances to experience art, and I firmly believe everyone deserves access to art.”

In many ways, Baker Cahill’s use of AR in her work grants that access, and the result is just what was proposed in that political theory class all those years ago. “We need art more than ever right now,” she says. “We need to engage people’s imaginations instead of their passive consumption of cultural products.”

Baker Cahill’s app, 4th Wall, is available for iPhone and Android. Visit her website to see a demo of how the app has been used. To see how others have placed her art work in context, follow her on Instagram at 4thwallapp.