In a corner of his office, Steven Swoap, professor and chair of biology, has a stool with two dancing mice drawn on it. While the pair more closely resemble Beatrix Potter characters than actual rodents, Swoap and his thesis students Rebecca Maher, Uttara Partap, and Christine Schindler have a strictly scientific interest in mice.

In much of basic science mice serve as important models of human conditions. Researchers can manipulate their genes, linking them with specific functions, and can translate the findings to humans. But the many ways in which mice differ from humans can present challenges to that research—and to the mice themselves.

“There was a pretty steep initial learning curve in taking care of the mice,” Maher says.

For instance, lab mice are usually housed in temperatures of around 20ºC (68ºF), which is comfortable for humans but too cold for mice, causing them to suffer “cold stress.” Maher’s research examines ways to alleviate cold stress. Simply housing mice together or with nests could do the trick, she found after testing different conditions and monitoring the mice’s heart rates, blood pressure, and metabolic rates.

Maher and fellow classmates Partap and Schindler were honored recently for their research by the American Physiological Society. They won three out of 13 David S. Bruce Excellence in Undergraduate Research awards granted at the association’s Experimental Biology conference this spring.

Partap and Schindler worked together on two sides of an important finding related to the drug rapamycin, which has caught the attention of many researchers as a potential longevity drug. Partap and Schindler found that rapamycin can cause insulin resistance, pancreatic damage, and diabetes in mice. They also found that the effects of rapamycin were different for male and female mice and were, to varying degrees, reversible.

As impressive as their results were, Swoap says a thesis project is less about getting the right answers than it is about learning to design experiments and develop and test hypotheses. Even if students fail to get the results they initially expected, that doesn’t constitute a failed experiment, he says.

Schindler says the process was challenging but worthwhile. “Piecing together different aspects of the experiment—like the physiology, tissue structure, or insulin counts—to create a complete research project was very rewarding,” she says.

Both Partap and Maher have had previous research experience at Williams and elsewhere. Partap has worked with Swoap for two years and co-authored with David Hill ’73, director of Quinnipiac University’s Global Public Health Program, two papers on public health that grew out of a 2010 Winter Study course at Williams (the papers were published in the journals International Health and The American Society of Tropical Medicine and Hygiene).

Working on a thesis was a much different experience. “It allowed me to more independently think about, design, and work on a project that really interests me,” Partap says.

Maher agrees, reflecting on her previous experience as a research assistant at the Yale Cancer Center. At Williams, she could have complete control over her project and work closely and directly with professors instead of graduate students. 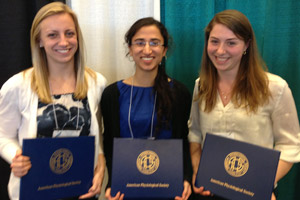 “Students at Williams own their projects, becoming intellectually engaged and invested in them,” Swoap explains. “They emotionally and intellectually understand the project; they know it in and out.”

Swoap’s students have won the David S. Bruce award in several previous years, but this is the first time three students from Williams have won in the same year. “We were nervous that we might end up in an awkward situation,” says Schindler. “It would have been fine if none of us got it but what if one of us didn’t get it?” Fortunately, none of them left with that awkward feeling.