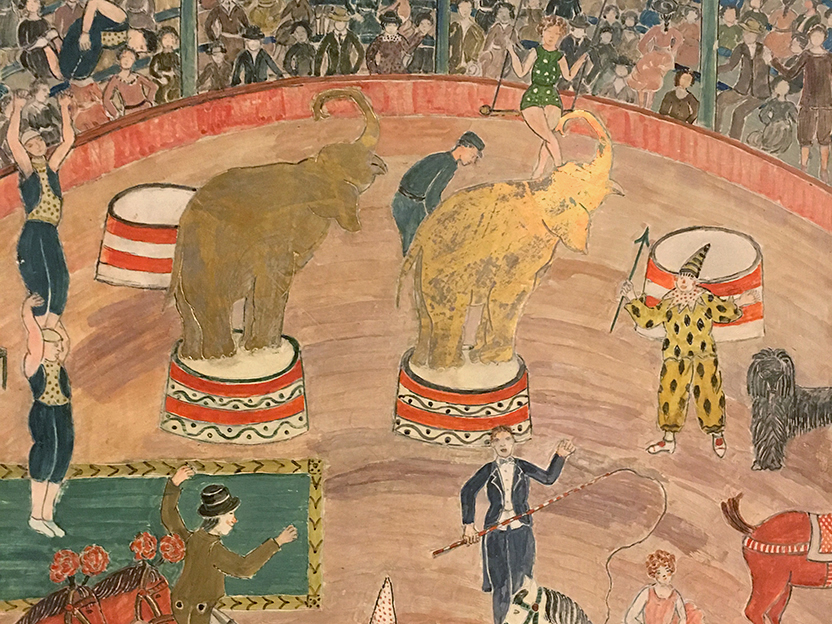 What does it take for a being to have moral standing in the universe? That’s the question philosophy professor Joe Cruz ’91 posed to his students on the first day of his course, Philosophy of Animals. As a supplement to the course, the Williams College Museum of Art (WCMA) developed an exhibition of related works to help inform the discussion around this question and others.

Cruz has taught Philosophy of Animals twice before, but this is the first time he’s partnered with the museum. “RAWR! A WCMA Bestiary,” curated by Kevin Murphy, the Eugenie Prendergast Senior Curator of American Art, considers how art has helped create arbitrary distinctions between humans and animals.

When Murphy approached him about the exhibition, Cruz embraced the idea. “Kevin basically said, ‘We could do a show that would express so many of the dimensions of your course but add to those dimensions by making it real, visceral, passionate, expressive,’” Cruz recalls.

The students explore concepts such as agency, sentience, and animal cognition; they consider questions about the morality of factory farming, hunting, and eating meat, while also reading the latest scientific literature. “We’re doing the moral philosophy and the animal cognition research at the same time,” Cruz says. Bringing WCMA objects into the conversation gives the students “a chance to see a different way of expressing our relationships to animals. My philosophy students are very used to making sense of the world through words. The exhibition shows another kind of expression.”

For “RAWR!,” Murphy and Cruz considered how the museum pieces might intersect with major themes of the course. Approximately 506 animals are represented in 115 objects. “A lot of our experience of animals is mediated through artwork, and animals have been the subject, in a variety of ways, for artists over time and across geography,” Murphy says.

Take ritual context, often represented through animal masks. “What those masks mean,” Cruz says, “is that we think we can have something in common with non-human animals.”

Kathryn Kennedy ’18, a philosophy and biology major, says “RAWR!” helped her contextualize the essays she read for class that argued rationality isn’t necessarily the best approach when thinking about the treatment of animals. The essays and the exhibition “were really helpful for how to think about the ways that both philosophical and reason-based arguments interact with other persuasive forms of media to change how we think,” she says.

Anna Kim ’19, an English and philosophy major, says she entered the class with “a lot of assumptions and habitual attitudes toward the treatment of and moral regard for animals.” Now she has a more “opened-minded sensitivity” to distinctions between humans and animals. “I have changed my mind from thinking of humans and animals as opposite ends of the moral scale to species that are comparable on a more fluid spectrum,” she says.

Future iterations of Philosophy of Animals will not have an accompanying exhibit, but now Cruz knows the type of animal-related artwork the museum holds. “I can imagine having a much smaller scale engagement with WCMA, where I am in a position to select specific works to talk about,” he says.