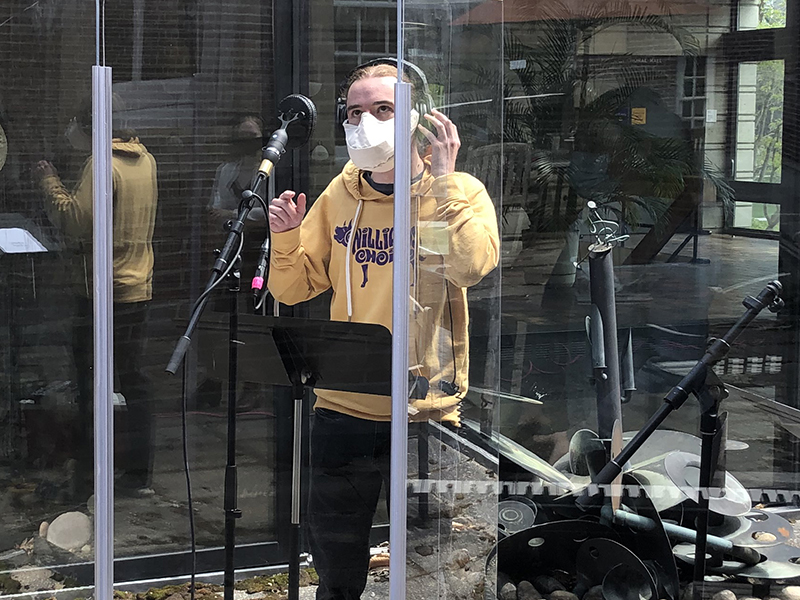 A Tribute in Song

Williams students contributed vocal tracks for the opening number of a virtual tribute concert for the late Adam Schlesinger ’89. Adam Schlesinger: A Music Celebration will stream on Wednesday, May 5, at 8 p.m. EDT on the Rolling Live platform, with ticket proceeds benefiting MusiCares and New York’s Bowery Electric.

Schlesinger, who died in April 2020 from complications of the coronavirus, was a renowned singer-songwriter known for his bands Fountains of Wayne (formed with Chris Collingwood ’89) and Ivy, as well an award-winning career writing songs for film, theater and television. He was awarded a Bicentennial Medal in 2017.

A mix of Williams music majors and choir members came together to record vocal tracks for “Sink to the Bottom” from Fountains of Wayne’s debut album. An ad-hoc outdoor recording studio was set up in the Bernhard courtyard in order to follow Covid-19 protocols, which currently prohibit singing indoors in the presence of others. Participating students included Michael Arena ’23, Rebecca Christainsen ’21, Katharine Cook ’24, Huijun Huang ’22, Anna Leedy ’22, Christopher Van Liew ’23 and Guanghao Yu ’21.