On a recent Saturday, Chapin Hall bustled with excitement, filled with concertgoers looking forward to a Berkshire Symphony performance. But these attendees were not typical symphony fans—children of all ages and their families gathered together for the very first Berkshire Symphony Family Concert.

The concert was born out of collaboration with Ephs Out Loud (EOL), a new student group dedicated to promoting music education and community outreach. It includes about 20 students from the Williams music community. The group’s founders, Anna DeLoi ’18 and Abigail Soloway ’18, began organizing the event last spring. Since then, members of EOL have gone into local schools and other community groups to provide lessons, performances, and workshops.

“In designing the concert, we tried to come up with ways to make it not just a performance, but a space for collaboration—for musicians and music lovers of all ages in the North Berkshires to celebrate and support each other,” says DeLoi. “We wanted it to belong to the local students and their families as much as it did to Williams.” 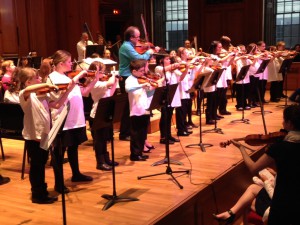 Taking place the day after the symphony’s regular concert, the Berkshire Symphony Family Concert featured more than just the symphony. Before the concert, students from the Kids 4 Harmony after-school music program at Brayton Elementary School in North Adams took the stage for a performance. When it was time for the symphony, the students in the audience already knew what to expect: They knew many of the students on stage as well as the music.

In preparation for the concert, EOL members went to nearby schools, including Mt. Greylock, Brayton, and Williamstown Elementary, as “musical ambassadors,” introducing students to Modest Mussorgsky’s Pictures at an Exhibition, which the symphony played for its regular concert. With its evocative musical imagery, it was the perfect piece for a concert geared toward younger listeners. During their visits, the musical ambassadors asked students to draw pictures while listening to each movement. Their artwork was projected onto a floor-to-ceiling screen at the back of the stage while the symphony played, allowing the young artists to make connections between the music they heard and the images it brought to mind.

Before the concert began, Bernhard Music Center was transformed: there was an instrument “petting zoo” where children and their families visited up close with the types of instruments played in the symphony, craft tables with paper-plate tambourines and straw kazoos, refreshments, and face-painting.

Jonathan Myers, concert and event coordinator for the Music Department, notes that the concert is “unique because from the beginning this effort has been almost completely fueled by the energies of Williams music students. Having things run by young musicians for an audience of even younger ones gives things a whole new perspective. It is extremely refreshing.”

Soloway and DeLoi came to Williams as first-years with plans to join the symphony, and with backgrounds in music outreach, it was only a matter of time until they began brainstorming for ways to involve the music department in the larger community. “We wanted to break the purple bubble,” Soloway says.

EOL has brought the music department into conversation with the larger Berkshire community. Williams students and chamber groups gave a concert at Sweet Brook Nursing Home, played music with children at the Mohawk Forest Mentoring Project, and partnered with MASS MoCA to run a kids’ music tent at Freshgrass bluegrass festival last fall. The group kept busy during Winter Study, with a chamber music residency at Mt. Greylock, and they’re piloting a private lesson program there this semester.

In addition to Ephs Out Loud, DeLoi is on the board of Students for Education Reform, works in local elementary schools, and works with Kids for Harmony. Soloway conducts the opera workshop and Student Symphony, and she is currently organizing a community contradance. Together, the pair has fostered a greater sense of community in the music department, bringing musicians of all backgrounds together to engage the world beyond Williams.

Marjorie Hirsch, chair and professor of music, is glad to see community-centered activities growing within the music department. “Anna, Abigail, and many other members of EOL have devoted extraordinary effort to helping area school children develop a love of music and improve their musical skills. I am enormously impressed by what EOL has accomplished in just one year. This newly formed student group has built a strong foundation for music department outreach projects next year and beyond.”

Next year’s Berkshire Symphony Family Concert is already in the works.