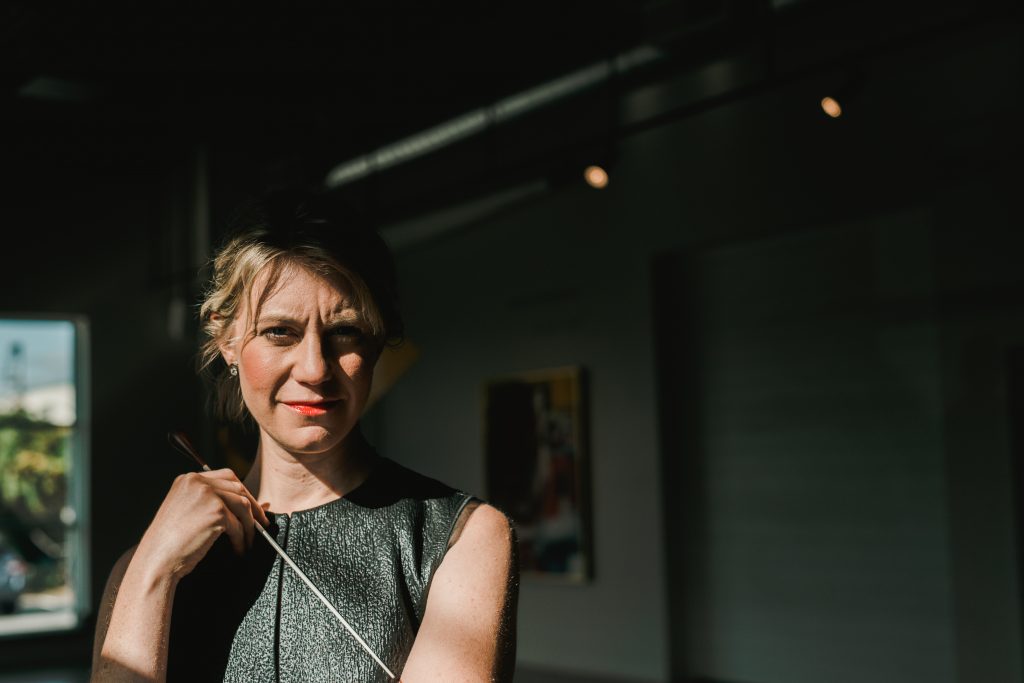 Emily Isaacson ’04 remembers attending classical concerts as a teenager, feeling the music viscerally, connecting with the sound. The music was exciting, passionate—it made her want to move her body. It let her tap into feelings she could not put into words.

Yet there was a disconnect between the way the music made her feel and the way traditional concerts wanted Isaacson to listen to it—in silence, in a cathedral-like hall, following unwritten rules. She wants to “clap between movements and sway in the aisles,” she says. And so she has made it her work to bring music to the community as a shared experience, an excitement and a call to action.

Today she does that as founder and artistic director of Classical Uprising in Portland, Maine. She created the nonprofit at the height of the pandemic in 2020, merging Maine’s Oratorio Chorale, which she has led since 2013, with the Portland Bach Experience, which she founded in 2018. She now leads more than 60 professional artists, 120 adult amateur singers and 70 young musicians in performances to build community. They move music out of the concert hall and into the places where people are—the ferry station, the farmers’ market, downtown—through sound installations, events and educational programming. 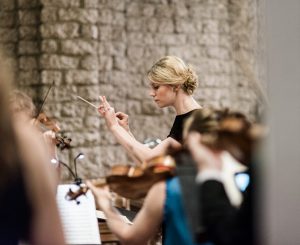 This month, Classical Uprising will hold the Portland Bach Experience, a live, mostly in-person series across 10 days in June, including A Midsummer Night’s Dream: Carnival Concert & Community Celebration—a day-long music festival including a parade of giant puppets, a Fairy Queen drag show with a live symphony orchestra and a community dance party. The group will perform around town throughout the festival, from a Bach and Beer night pairing concerts and brews to Handel happy hours and family ice cream concerts.

Isaacson traces her passion for this work to Williams. Though she majored in English, she had wanted to work in music as a conductor since she was 13, and she explored growing interests in political activism. She created a sound composition and installation for a course called Art and Justice, taught by political science professor Mark Reinhardt and artist and lecturer Peggy Diggs. And she found a mentor in Williams choral director Brad Wells.

“I walked into Williams ready to have conversations with Brad about how do I build this career, what are the next steps, what do I need to study,” Isaacson says. “And so Brad and I must have had dozens if not a hundred brown bag lunches under the trees — I can picture it outside WCMA—talking about this stuff: what is an ensemble, what is classical music, what is the way to experience classical music.”

She followed that path in the years after she graduated. She earned a master’s degree in musicology at University of Edinburgh, a master’s in music and choral conducting at University of Oregon and a doctorate in conducting from the University of Illinois. On Williams-sponsored fellowships, she traveled and studied in Sweden and in Cuba. And she began working with Wells in 2008 to found the Grammy Award-winning ensemble Roomful of Teeth.

As Wells’ assistant, Isaacson approached funders and wrote grant applications. She says she saw the grit and consistency Wells needed to bring to life an ensemble that gathers musical traditions from around the world. The group, she says, has a sense of invention and connection; it’s the same spirit that moves her work today.

“It’s all about flexibility, connecting,” Isaacson says. “Reconfiguring, re-imagining, opening, a real touch sense… Inclusivity. … An expansive sense of what is expression—all of that I think is in Brad’s work and mine.”

Wells continues to be a mentor, and she still collaborates with Roomful of Teeth’s musicians and composers: Dashon Burton, Esteli Gomez, Pulitzer Prize-winner Caroline Shaw and more.

“Roomful of Teeth has become, I would say, the most influential ensemble in choral music and even in classical music in the last decade,” Isaacson says. “Brad and the Teeth have broken down enormous barriers.”

Classical Uprising, too, seeks to remove barriers, presenting classical music the way composers envisioned it and musicians originally played it. Centuries ago, people heard Bach in crowded, informal rooms, Isaacson says, with friends around them talking, flirting and drinking.

“Bach’s secular music premiered at Zimmerman’s Coffee House,” says Isaacson. “It was a coffee shop—and coffee was a borderline illicit drug in Leipzig at the time. … It was one of the only places middle-class men and women could mingle without supervision. … This is their release on a Saturday afternoon.”

People want to listen to classical music that way today, too, she says.

“In our free time, we want to talk, we want to connect, we want to spend time with our kids, our family,” she says. “I want to put this music back into its natural habitat. … We’ll bring art to where your life is.”

This month’s A Midsummer Night’s Dream is Classical Uprising’s fourth program this year. Over the winter, Grammy-nominated and internationally acclaimed countertenor Reginald Mobley worked with Isaacson to create Amazing Grace, a virtual concert of Black spirituals from the 1600s to the Black Lives Matter movement. Mobley and Janay Woodruff of JanaeSound performed as soloists with the Oratorio Chorale, and readings wove through the music. Judith Casselberry, associate professor of Africana studies at Bowdoin College, offered research and reflections from leaders across the years, from Frederick Douglass and W.E.B. DuBois to Bernice Johnson Reagon.

For Amazing Grace, Isaacson also enlisted the help of Gwyn Chilcoat ’24 through Williams’ wINTERNship program in January. Chilcoat researched contemporary writers, with works like Porsha Olayiwola’s poem “how to make yourself small or how to be black and survive.” Chilcoat also gathered and curated antiracism resources for Classical Uprising’s website.

Another wINTERNship student, Paige Busse ’24, helped Isaacson compose Thanks in Variations at Thompson’s Point, the first sound installation ever created in a Portland garden. The outdoor, interactive work, which opened in April, drew on mindfulness meditation and Isaacson’s new arrangement of a 15th-century canon, Johannes Ockeghem’s Deo Gratias. Isaacson says the arrangement is a contemporary work inspired by the equinox and the pandemic. She led the chorale in performing the new work during a March 2020 concert, a week before the Covid-19 pandemic caused widespread shut-down. People have told her in this dark year, her music has given them light.

“The voices of community are here,” Isaacson says, “and we are still supporting one another.”

Kate Abbott ’00 is a freelance writer based in Williamstown, Mass., and founder of the website btwberkshires.com.