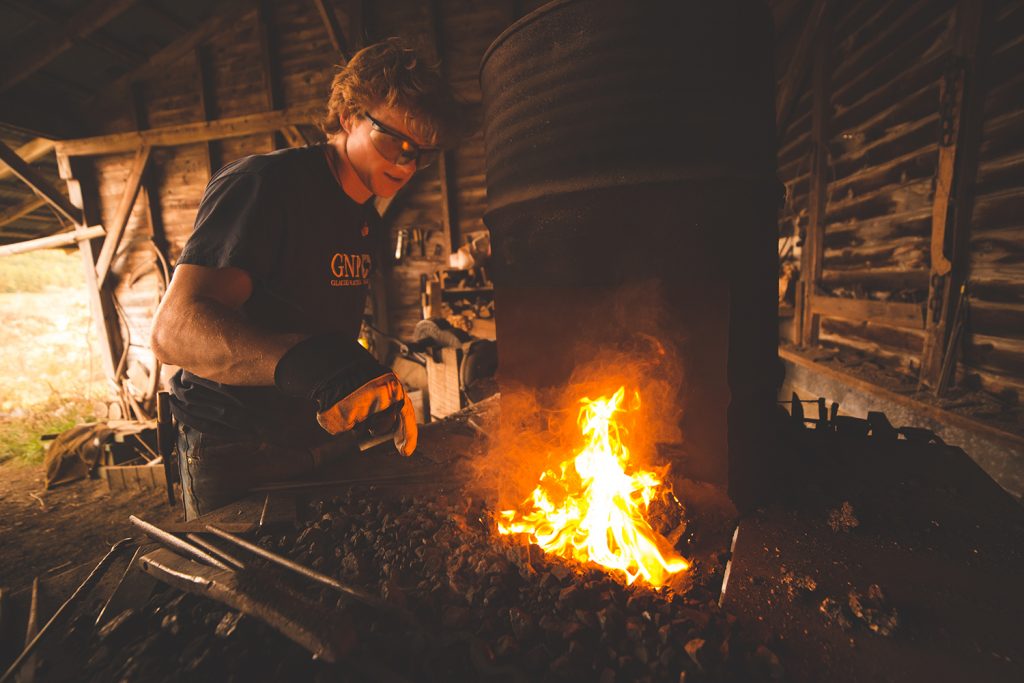 Jordan LaMothe ’17 has loved making tools since he was a kid and his artist parents relocated from an urban setting to a 96-acre farm in upstate New York. They wanted more room to make their art, but for nine-year-old Jordan, the farm was “a fascinating place filled with possibilities,” he says. “I wanted to figure out how everything worked.”

By the time he was 15, LaMothe had his own dairy cow and a pair of oxen, as well as the blacksmithing skills required to make the tools necessary for those animals to be productive. “Blacksmithing was one part of my vision of farming,” he says. “And at that age, I wanted to be a farmer when I grew up.”

So it’s something of a surprise that LaMothe went to college at all. “I finally decided it would be a good experience to go to college for the sake of going to college,” he says.

In addition to all he learned in his music major (LaMothe plays the saxophone and sings), his Williams education contributed much to the work he does today making, as he writes on his webpage, “all manner of knives, daggers, and swords.” In his sophomore year at Williams, LaMothe got a job at the Bronfman Science Shop. Most of his fellow student workers were physics majors who, he says, “need to learn the skills required in a machine shop to be able to conduct their experiments.”

According to its website, the Science Shop “designs, fabricates, modifies or repairs individual parts or complete systems” used in science lab work. “The capabilities of the shop include machining and fabrication with metals and plastics, laser cutting and engraving, CNC milling, 3D printing, woodworking, welding, and electronics fabrication.” LaMothe wanted to work there because, after a year away from the farm, he missed making such “useful things.”

Back in high school, when he was teaching himself blacksmithing, he knew he wanted to make a tool widely considered useful. “The knife is the most useful tool that we have,” he says. “Practically every adult human uses it on a daily basis to prepare meals or to go about their daily life; it’s something everyone needs.” So he got some books and took a three-day blacksmithing course before setting up a shop in one of the barns on the farm.

“I started that in high school, and then spent college summers and breaks making knives and going to knife events,” he says. So, when the History Channel’s Forged in Fire came calling, it seemed like a wise decision to take a break from school—“in the middle of the spring semester of my senior year, much to the chagrin of my professors”—to participate in filming.

Forged in Fire is a History Channel reality show competition among knife makers, and when LaMothe won, the foundation was laid for his career after graduation. “I spent the end of my senior year scheduling orders and giving quotes because I had a lot of people asking for work after the show aired,” he says. “It gave me a good two years’ worth of work.”

LaMothe now runs his smithing shop full time, takes his knives to shows around the country, and engages with what he says is a small, close-knit community of knife makers and maintains a website to highlight his work. “Knife makers are very open, we share ideas and techniques and concepts.” For a self-taught knife maker and blacksmith who never apprenticed, that community is important to him.

But LaMothe still points to his time working at the Williams Science Shop as foundational, saying, “I use skills I learned there every day in my work now.”